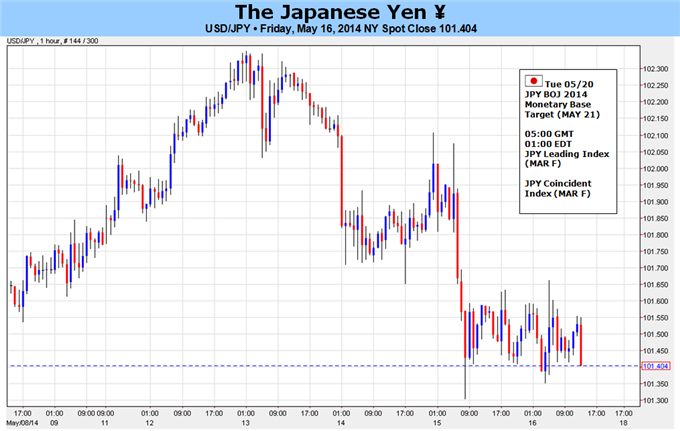 The USD/JPY extended the decline from earlier this month, with the pair slipping to a fresh low of 101.30, and the Bank of Japan (BoJ) interest rate decision may continue to undermine the bullish sentiment surrounding the dollar-yen should we see a more material shift in the policy outlook.

In light of the marked pickup in Japan’s 1Q GDP report, the BoJ may sounds increasingly upbeat on the economy, and the central bank may continue to scale back its willingness to further expand its asset-purchase program as Governor Haruhiko Kuroda remains confident in achieve the 2% target for inflation. With that said, we may see a growing number of BoJ officials soften their dovish tone for monetary policy, and the USD/JPY may weaken further in the week ahead should the board show a greater disposition to halt the easing cycle sooner rather than later.

At the same time, we are likely to get more of the same with the Federal Open Market Committee (FOMC) Minutes as Chair Janet Yellen remains reluctant to move away from the zero-interest rate policy (ZIRP), and a further deviation in the policy outlook may encourage a more bearish outlook for the USD/JPY as it threatens the bullish trend carried over from the previous year.

In turn, the fundamental developments coming out next week may encourage a more bearish outlook for the USD/JPY, and we may see a more meaningful run at the 101.00 handle as the BoJ turns increasingly upbeat towards the Japanese economy. - DS