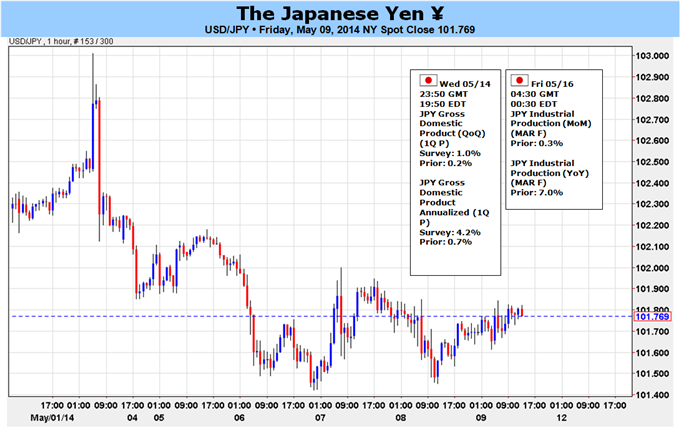 Japanese Yen Remains a Sell Until this Changes

The Japanese Yen trades at critical resistance versus the US Dollar (USDJPY trades at support). Given extremely low volatility expectations it seems unlikely we see a major USDJPY breakdown, but any major surprises out of upcoming Japanese data could force sharp currency swings.

FX traders sent 1-month volatility prices on USDJPY derivatives to their lowest levels on record, and it’s obvious that very few expect to see big things through the foreseeable future. Our forex technical forecasts as well as sentiment-based outlook subsequently favor a USDJPY bounce off of the lows. Yet expectations often beget disappointment; what could force a major Japanese Yen breakout?

Top economic event risk comes from Japan’s Q1 GDP Growth numbers due Wednesday night/Thursday morning, and any surprises could shake the currency from its tight trading range. Consensus forecasts call for a substantial 4.2 percent annualized rate of economic growth in the first quarter. Such lofty expectations arguably leave risks to the downside for the data itself and the Japanese currency. But why is the JPY stuck in such miniscule trading ranges across the board?

Put simply, forex volatility is near record-lows as risky asset classes continue to outperform. Yen volatility may trade to further lows if the US S&P 500 and Japanese Nikkei 225 continue to trade onto fresh peaks.

In that sense it will be important to watch how Japanese equities respond to key economic data; any Nikkei 225 losses might actually result in Yen strength (USDJPY weakness) regardless of the economic implications of the news results.

The absence of any major surprises in upcoming event risk would likely leave the status quo intact. It’s important to note that the Yen has historically fallen in times of low volatility, and indeed we would argue that a further compression in vols should keep the USDJPY above key support. The risk is that material disappointments in data could force equity market tumbles and, by extension, a USDJPY breakdown. - DR