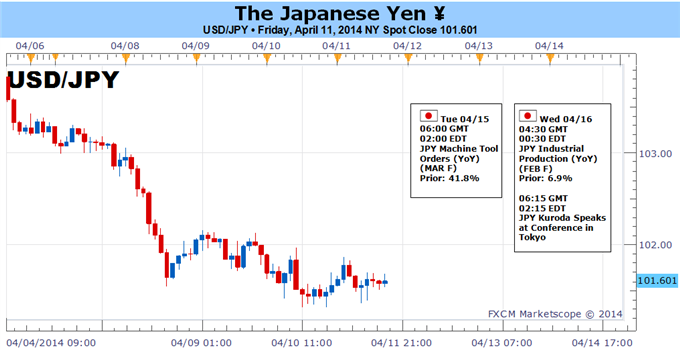 What’s the Risk of a Much Larger Japanese Yen Breakout?

The Japanese Yen surged against major forex counterparts as the S&P 500 and Japanese Nikkei 225 tumbled. A rush to safety favored the JPY, and the fact that it trades at critical resistance (USDJPY support) suggests the week ahead could bring further volatility.

Japanese equities bore the brunt of the global shift towards safe-haven assets as the Nikkei posted its single-largest weekly decline in three years. The highly-correlated Dollar/Yen exchange rate looks especially at risk if the Nikkei falls to further lows.

Sharp domestic equity underperformance can partly be blamed on a disappointing Bank of Japan monetary policy announcement. Central bankers left the current pace of Quantitative Easing purchases unchanged, and surprisingly hawkish rhetoric from BoJ Governor Kuroda sunk hopes that they would ease policy further. To that end it will be important to monitor commentary from the BoJ chief this week; we suspect that Nikkei weakness and JPY surges would likely soften the bank’s stance on further QE.

Similarly surprising commentary from the US Federal Reserve put further pressure on the US Dollar/Yen exchange rate in particular. Minutes from the recent Federal Open Market Committee meeting showed that several members believed interest rates would rise more gradually than staff projections predicted. The effect on US interest rate futures was clear: implied yields for the December, 2015 interest rate futures fell to their lowest since the USD traded to ¥101.20 just one month ago.

There’s certainly risk that this may be the start of a larger USDJPY breakdown and Japanese Yen break higher. Yet it’s important to note that FX options show volatility prices remain near multi-year lows. In plain words: traders aren’t necessarily betting on/hedging against much larger USD moves.

Until we see a more significant shift in FX market conditions it’s difficult to argue for a much larger JPY break higher (USDJPY breakdown). Yet it would be foolish to ignore the clear risk that the Nikkei 225 could fall further, and clear pressure on US interest rates could likewise keep the Dollar under pressure through the days and weeks ahead. - DR