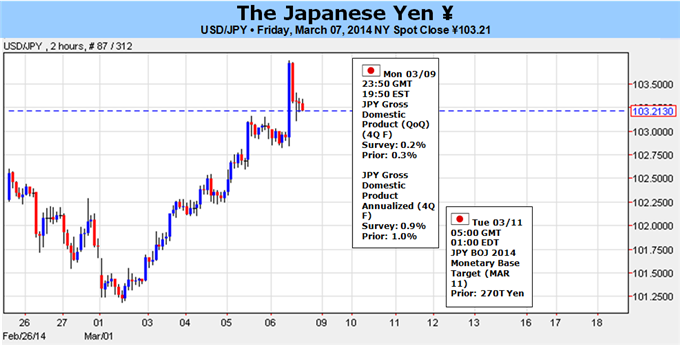 There are two primary concerns for yen cross traders: is risk appetite supporting these over-valued carry trades and will the Bank of Japan follow through on its tacit vow to drive its currency lower? Doubt has crept in on both fronts over the past months as the correlation between risk-sensitive assets has slackened and the central bank has backed off its threats to pursue inflation at any cost. Yet, speculative appetite perked up this past week with the yen crosses rising between 3.1 and 1.2 percent (AUDJPY to CADJPY). With a BoJ rate decision and a contentious and sentiment on trial this week, expect anxiety and volatility.

At their foundation, the yen crosses are carry trades. If there weren’t this investment connection; it is unlikely that Japan’s government and central bank would be very successful in driving its currency down. Yet, in the risk-reward balance found in this particular speculative endeavor there is a severe imbalance. Where the ‘risk’ column is still very low (the FX-based volatility index slipped to a 14-month low this past week), the ‘reward’ is far weaker. Looking at short-term yield differentials on these crosses, the carry is still dragging around near historical lows.

This unattractive FX dividend, however, has been supplemented by a grab for anything and everything that is expected to appreciate during bullish market cycles. Whether we label this irrational exuberance, moral hazard or just a bullish market; the yen crosses have benefit to the tune of 15 to 43 percent appreciation over the past 18 months across its liquid pairings. As of last week, the medium-term correlation between USDJPY and the Nikkei 225 (the Japanese equity index is a good, local measure of risk appetite) stood at 0.66 on a 20-day rolling basis – meaning the two tend to move in the same direction at generally the same pace.

While there is relatively little risk that yen will lose its tether to traditional risk trends, there is serious concern over the health of sentiment itself. Exceptionally low levels of implied volatility (insurance premium) and record high US equity benchmarks belie a fading economic outlook, excessive use of leverage and viscosity in the funding market. Yet, these have been issues for some time. More tangible and immediate threats to our picture of tranquility are the situations in Ukraine, Chinese trusts and US monetary policy.

As we keep a cautious eye on the potential for risk trends, a different requirement for continued USDJPY appreciation will be put to the test this week: the Bank of Japan’s commitment to fight inflation with stimulus. While the central bank has maintained a near $75-billion-per-month, open-ended program, this program may not be enough to engage the next leg up. With the initial introduction of this program, most of the progress from the market was founded in the lead up to the announcement. The drive quickly fell stalled after the program was realized. Over the past weeks, we have heard language that policy officials would do ‘everything necessary’ to meet their inflation targets, but there seems to be a sense of contentment with their hitting those objections within the given time frame. If that is the case, there isn’t a need for an upgrade to stimulus. If the BoJ confirms this approach, they may quickly find it was the expectation for an ‘undefined more’ that pushed the market – not the QE program itself.

According to yields and economists’ expectations, there is little expectation that changes will be pursued by the policy committee at this upcoming meeting. Consistent with the first QE effort, fiscal year end and tax hike; those hoping for a stimulus upgrade suspect April would be the opportunity. If a move is imminent though, we would expect to see some sort of warning – explicit or implied – at this gathering. Other key event risk to watch includes the 1Q business sentiment survey and January trade figures. - JK