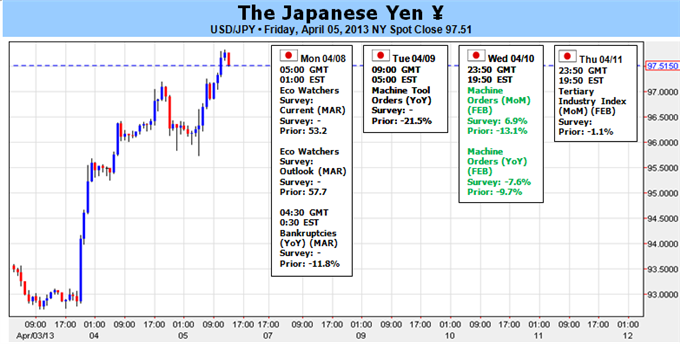 What a week for the Japanese Yen. The JPY traded to fresh monthly highs ahead of the heavily-anticipated Bank of Japan rate decision, but a shocking BOJ result forced the USDJPY to its biggest two-day surge since the heights of the financial crisis in 2008.

We wrote last week that the weight of expectations was perhaps too high ahead of the Bank of Japan, and the Japanese Yen could strengthen (USDJPY decline) if the central bank disappointed. Of course newly-appointed BoJ Governor Kuroda was clearly aware of said risk—by most estimates the central bank delivered twice the amount of expected QE as it worked to achieve a lofty 2% inflation target.

The Japanese Yen’s reaction to the BOJ says it all: aggressive money printing will likely continue to haunt the JPY through the foreseeable future. One need only look to Japanese Government Bond Yields: the 10-year JGB yieldplummeted to its lowest levels since 2003. It’s difficult to overstate how important this will be: the Japanese investor is the largest net-creditor to the rest of the world. This makes the JPY the most interest rate-sensitive currency on the planet; a decade and change of low interest rates leaves investors chasing yields abroad. A further drop in domestic rates will almost certainly encourage those with savings in Yen to invest them elsewhere.

All else remaining equal, we expect yields to continue pressuring the Japanese Yen to multi-year lows across the board. Markets are far too dynamic and fast-changing to expect domestic rates to be the ONLY mover for JPY pairs, but that’s why we look at relative yields as well.

To that end we’ll watch the coming week’s US Federal Open Market Committee (FOMC) Meeting Minutes due Wednesday—perhaps especially significant given the sizeable disappointment in US Nonfarm Payrolls data. Fed Chairman Ben Bernanke disappointed Dollar bulls when the official statement following its March 20 rate decision offered no real clues on the end of Quantitative Easing policies. Since that meeting, US Treasury Yields have fallen sharply; the 10-year note is now at year-to-date lows of 1.71% and down 20bps since the Fed announcement.

The Fed’s relative inaction should be hurting the USDJPY in particular. But the fact is that the Bank of Japan’s aggressive shift means that its balance sheet is projected to grow to 60% of domestic GDP by 2014. The FOMC has taken a lot of criticism for being too soft on inflation, but projections put the Fed’s balance sheet at 25% of GDP next year—they look like hawks compared to their Japanese counterpart. The next move in relative yields could determine direction in the USDJPY through the foreseeable future, and we’d expect the Fed to start tightening policy well before the Bank of Japan.

This week reminded me why I prefer automated trading. Our automated strategies put us into JPY-long positions (USDJPY shorts) ahead of the Bank of Japan, and we took heavy losses on the hard reversal. Had these been purely discretionary trades I’d likely have shut down for the day as I smarted from the losses. Of course those same strategies subsequently flipped direction and put us into JPY shorts (USDJPY and EURJPY longs, to be exact) and recouped losses/turned us positive in a hurry. Things don’t always work out that neatly, but it was a nice reminder that a tried-and-true trading strategy can weather some pretty bad trades.

This is how we’re positioning ourselves for Japanese Yen moves in the week ahead. Past performance is NOT indicative of future results, but we like using our sentiment-based trading strategies given their recent outperformance. View more information on our strategies and download them for free via an ongoing promotion. - DR