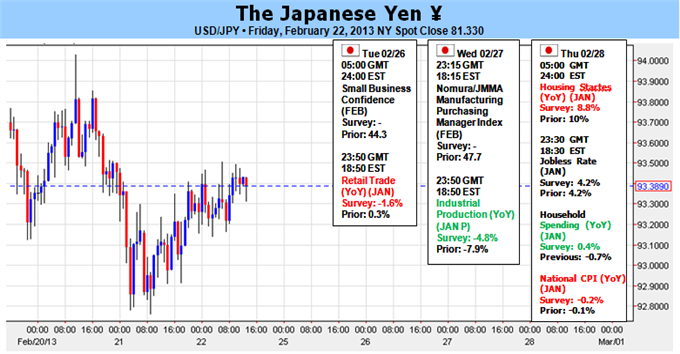 The Japanese Yen held a narrow range going into the final days of February, but the low-yielding currency remains poised to face increased volatility in the days ahead as the new government plans to announced its nomination to replace Bank of Japan (BoJ) Governor Masaaki Shirakawa. Indeed, there have been many reports surrounding the appointment as Prime Minister Shinzo Abe pledges to tackle deflation, but it seems as though we’re seeing a close race between Kazumasa Iwata and Toshiro Muto, who both served as a Deputy Governor on the BoJ.

There’s growing speculation that Kazumasa Iwata would take the helm and heighten the bearish sentiment surrounding the Japanese Yen as he remains a prominent supporter of unconventional measures, and we may see the central bank continue to push into uncharted territory as Mr. Iwata favors purchasing foreign bonds to further weaken the local currency. At the same time, there are arguments that Toshiro Muto remains a favorite as he presents himself to be more dovish than Governor Shirakawa, and would strike a well-balanced approach for the central bank as he remains less inclined to implement more radical measures to balance the risks surrounding the region. As a result, the outcome could heavily sway the near-term outlook for the Japanese Yen amid the ranging views between the two candidates, but we will maintain our bearish bias for the low-yielding currency as the new government pushes the central bank to achieve the 2% target for inflation as quickly as possible. In turn, any near-term rallies in the Japanese Yen are likely to be short-lived, and we still anticipate a fairly muted correction in the USDJPY amid the deviation in the policy outlook.

Beyond the headlines coming out of Japan, we will also be keeping a close eye on the Humphrey-Hawkins Testimony as a growing number of Fed officials adopt a more neutral tone for monetary policy, and it seems as though the FOMC is slowly moving away from its easing cycle as the world’s largest economy gets on a more sustainable path. As the USDJPY trades within a tight range, a bullish flag pattern appears to be taking shape, and the technical formation certainly foreshadows further advances for the dollar-yen as the relative strength index continues to find interim support around the 60 figure. - DS