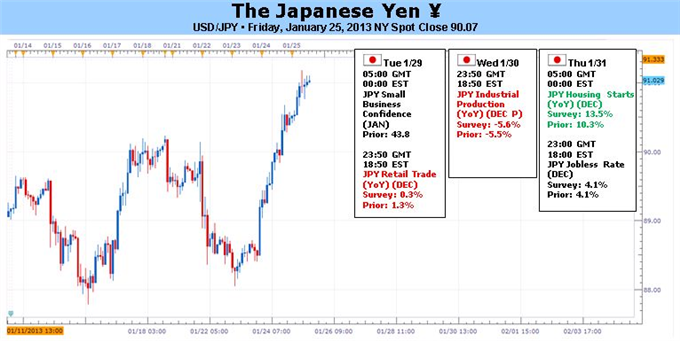 The Japanese Yen ended the week as a bottom feeder, finishing only ahead of the Canadian Dollar, while losing significant ground to several of the other majors. Just this week, the Japanese Yen lost -1.98% to the Euro, as the EURJPY finished the week at 122.32. The USDJPY was also stronger, gaining +0.90% to 90.91, as US Treasuries and JGBs diverged, with the former seeing an increase in yield, while the latter remained under pressure (the converse relationship implies that JGBs increased in price). Of course, the centerpiece story to the Yen’s demise – albeit one easily complemented by the global rush into higher yielding and riskier assets, like the S&P 500 – is that the Japanese government is aggressively pushing the Bank of Japan to implement some of the most dovish monetary policies ever implemented during the modern era during a non-crisis (a la 2008/2009) period.

This week was the first week we truly got to see the BoJ ‘walk the walk,’ with a +2.0% yearly CPI target implemented, as well as the promise of further easing (¥13 trillion per month in open-ended asset purchases) starting in January 2014. Initially, this proved positive for the Yen – net positioning remains heavily biased towards Yen weakness – with the currency market’s former safe haven darling rallying into early-Asian trade on Thursday. In fact, this has become a bit of the norm for the Yen: the Yen rallies versus the Euro, the US Dollar, etc. early in the week, then on each Thursday this month, it has absolutely collapsed, taking out formers lows amid the sharp move in the opposite direction. It is of no coincidence that Japanese policymakers have issued pleas for further Yen weakness mid-week either, and with this threat forever looming, we must take a bearish outlook on the Yen

Despite BoJ policy action on Tuesday, officials remained adamant about using the power of rhetoric to push down the Yen, a trend that is likely to continue going forward, especially since the BoJ has only started its insanely dovish approach towards monetary policy. On Thursday, Deputy Economy Minister Yasutoshi Nishimura said that it would not be a “concern” if the USDJPY traded up to 100.00. What makes the Yen’s weakness that much more impressive is that BoJ Governor Masaaki Shirakawa – for lack of a better phrase, a dead man walking in his current position – warned about overly aggressive dovish monetary policy, saying that “Long-term interest rates will spike and erode the effect of monetary easing . . . if people perceive the BOJ as having shifted to a policy of recklessly buying government bonds, focusing narrow-mindedly on achieving +2.0% inflation.” The market has ignored this warning, perhaps for good reason: Japanese Prime Minister Shinzo Abe has made it clear he will appoint a new BoJ Governor, one more sympathetic to his ultra dovish tendencies, when current Governor Shirakawa’s term ends in the spring.

If only to stress the that this is the tip of the BoJ’s dovish iceberg, consider the other options available: accelerating the timeline for open-ended asset purchases; increasing the size of the asset purchases; extending the maturity of bonds under its current asset purchase program; cutting the main interest rate from +0.10% to 0.00% or even negative rates; or cut the interest paid on excess reserves (IOER), to provoke banks into lending further (an effort to stimulate inflation). New measures between now and April, when the new BoJ Governor arrives, are fairly unlikely, unless there is further evidence to suggest that deflation is persisting despite recent policy changes (thereby implying that policy isn’t being taken as credible, which a weaker Yen would resolve as inflation is imported from abroad, or as prices rise on imports as purchasing power erodes).

The data due this week fits into this bearish outlook. Key releases such as Retail Trade (DEC) on Tuesday, Industrial Production (DEC P) on Wednesday, and Household Spending (DEC) on Thursday all forecast to disappoint, according to the DailyFX Economic Calendar. Keep an eye on the newswires for the coming week, as data will provide little reason for traders to shift bias in the face of heavy-handed interference from Japanese policymakers. Fundamentally, the Yen unraveling has just begun, as the end of BoJ independence has arrived. -CV