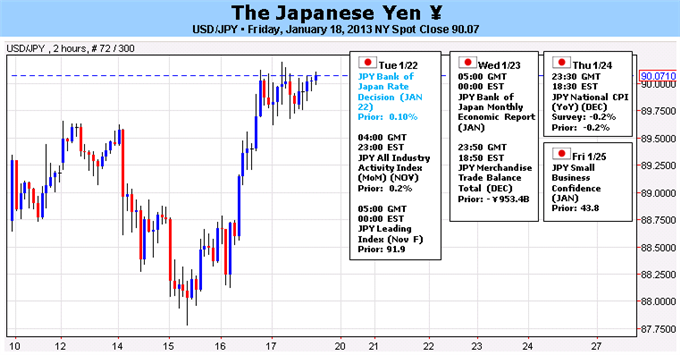 The Japanese Yen had another soft week, but it was not the worst performing major currency. Instead, that title goes to the Swiss Franc, which the Yen paced by +1.21%. It was also slightly stronger against the British Pound, which it gained +0.61% against. That’s where the good news ends. The Japanese Yen lost -0.75% or more to four major currencies, including another -1.03% against the US Dollar; the USDJPY closed the week at 90.10, its highest weekly close since the week of June 20, 2010. The main reason for Yen weakness, as it has been since mid-November, when then-Prime Minister Hiroshiko Noda announced it would hold elections in mid-December, at which point it time it became clear that Japanese polls were heavily biased in favor of a victory to current Prime Minister Shinzo Abe.

PM Abe has proved to be nothing short of the man he promised to be, going so far as to demand almost on the daily basis that the Bank of Japan implement a +2.0% yearly inflation target – double the current target of +1.0% y/y - and well-above the current headline rate of -0.2% y/y (the National CPI on Thursday will show -0.2% y/y as well, according to a Bloomberg News survey). Needless to say, to spur inflation of this magnitude will take a significant amount of easing, with the BoJ even going so far as having scope to implement negative interest rates in the near-future.

According to the newspaper The Nikkei, the BoJ and government are going to reach agreement on the next steps to take, one of which will be a ¥10 trillion addition to the asset purchase program (this complements the government’s ¥10.3 trillion stimulus package announced prior this month). Yet despite all of this blatant market manipulation, the Yen’s path is unclear; we must take a neutral outlook for this week, but acknowledge that there are three likely scenarios, two ultimately bullish over the next few weeks, and one bearish for the remainder of the 1Q’13.

It is worth pointing out that the Japanese Yen is very oversold. In fact, according to the CTFC’s COT report, net non-commercial futures positioning is just coming off of its its shortest level since July 2007; the short trade is very crowded and a significant unwind still needs to occur. A look at the weekly chart shows that the USDJPY hasn’t posted a negative period since the first week of November. In fact, last week’s RSI was above 80 – the last time that happened was in December 2005, which produced a pullback of >500-pips. Conditions are ripe for the turnaround; a catalyst is needed for a bullish move by Yen.

Thus, the most bullish scenario this week is that the aforementioned measures are taken – expectations are met – leading to a period of profit taking. This would not be unusual: the Dow Jones FXCM Dollar Index (Ticker: USDOLLAR)bottomed the day after the Federal Reserve announced QE3. Accordingly: seeing the Japanese Yen bottom (xxxJPY pairs top) after the BoJ would not be surprising; the conditions are ripe for a significant turnaround. The other bullish scenario for the Yen is similar to what happened in mid-September: the BoJ announces easing just beyond expectations, causing a temporary sell-off (xxxJPY pairs move to new highs), but the Yen ultimately rebounds over the coming days and weeks (xxxJPY pairs fall). This scenario unfolds if the BoJ were to announce a new easing package of ¥15 trillion instead of ¥10 trillion, for example.

The only bearish scenario for the Yen after this meeting is as follows: the BoJ and government announce agreement on a +2.0% inflation target; the BoJ increases its asset purchase program by ¥20 to ¥25 trillion; open-ended easing (akin to the Fed’s QE3 program) undertaken; and the 0.10% main interest rate is dropped to 0.00%. While the BoJ is likely to become more aggressive as the initial policy choices don’t work, these aggressive steps are unlikely to come at this meeting.

Overall, we are expecting very serious measures to be undertaken, likely bullish scenario one or two, as the bearish scenario is a far shot in the near-term. But to clarify: any bullishness in the Yen is a rally to sell over the coming weeks. Japan is mired in a generational deflation slump, one which goes back to the incredible growth bubble experienced in the 1980s. With the US debt limit negotiations about to come off the table, the Yen may only have a few days of reprieve ahead, but they could come this week, and come quite rapidly after Tuesday’s BoJ meeting. –CV