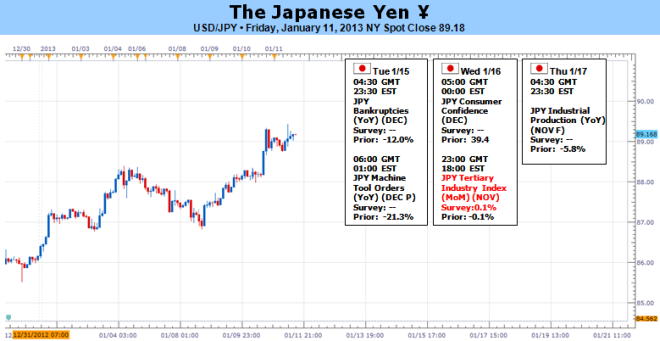 The Japanese Yen continued to lose ground against its major counterparts as Prime Minister Shinzo Abe pushes the Bank of Japan (BoJ) to adopt a 2% target for inflation, and the low-yielding currency may face additional headwinds over the near to medium-term as the central bank continues to carry out its easing cycle. Indeed, there have been reports that the new government and the BoJ will specify the inflation target in an effort to stem the risk for deflation, and we should see the central bank expand its balance sheet further in 2013 as the fundamental outlook for the region remains weak.

However, as the government unveils a JPY 10.3T fiscal stimulus program to encourage a stronger recovery, the new initiative is expected to boost the growth rate by 2% while creating nearly 600,000 jobs, and the expansion in public spending may push the BoJ to the sidelines as the central bank continues to carry out the JPY 76T in asset purchases. Despite expectations of seeing an upward revision in the inflation target, the BoJ may retain a prudent approach in utilizing its balance sheet in an effort to preserve the central bank’s independence. In turn, we may see Governor Masaaki Shirakawa continue to speak out against an unlimited asset-purchasing program, and we may see a more meaningful correction following the next policy meeting on January 22 should the central bank keep the asset purchase program on hold. Nevertheless, we should see the BoJ continue to embark on quantitative easing throughout 2013 amid the ongoing weakness in the real economy, and the Yen looks poised to weaken further over the long-term as the world’s third-largest economy remains at risk for deflation.

Although the marked appreciation in the USDJPY remains overbought, we’re waiting for the relative strength index to slip and close below the 70 figure to see a larger pullback in the exchange rate, but the pair may face a very shallow correction as the new government looks to have a greater influence on the central bank. As the positive slope on the short-term moving averages (10, 20, and 50 day) point to further advances, the USDJPY looks poised to threaten the 90,00 figure, and the Yen remains at risk for further declines as the BoJ maintains its pledge to pursue powerful monetary easing. - DS