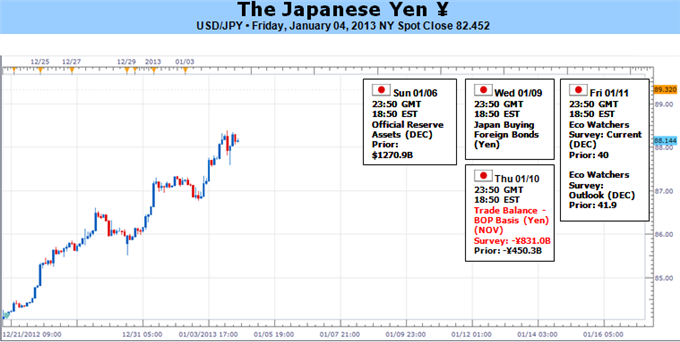 Forex: Japanese Yen Extremely Prone to Reversal With or Without Risk

Japanese Yen Extremely Prone to Reversal With or Without Risk

Experienced traders know that the probabilities in picking a major top or bottom in markets are exceptionally low - and therefore, the pursuit of timing exact turns is foolhardy. That said, extremes cannot last. And, the Japanese yen is certainly pushing the envelope. This past week, the yen crosses advanced another 1.3 (for CHFJPY) to 4.0 percent (NZDJPY) to ratchet fresh multi-month and multi-year highs. That is yet another incredible extension for a six-month run that has seen the yen drop between 12.8 (USDJPY) to 21.2 percent (EURJPY). A cross-the-board currency move of this magnitude is unusual enough, but it is the consistency of the drive that should really unnerve traders.

The most important factor to consider for the yen moving forward is that there are both active and passive market forces that can spur the yen to change course and see a hearty rally (yen cross tumble). For a passive driver, there is the considerable influence of a natural correction. With a USDJPY climb of nearly 1100 pips in the span of 3 months without even a 2 percent pullback, we are faced with an extremely one-sided market with otherwise tepid supports for continued advance. Considering speculative participation (measured through open interest in S&P 500 futures) is just off 15-year lows and carry yields are at historically anemic levels, there is extreme dependency on a sustained rise in risk taking. If speculative appetites were to level out, it could be enough to spark profit taking or catalyze opportunistic bears to shake test convictions.

A natural correction is highly probable. Though, alone it would likely be a restrained catalyst for a yen advance. To really add heat to a downturn on the crosses, the market needs an active catalyst. The most prolific and simultaneously concentrated spark for this particular currency would be a risk aversion move. Risk trends – measured through benchmarks like the S&P 500 – have maintained a persistent advance these past weeks and months, and the result for the yen has been clear. However, should we see the bite of panic start to seep into the speculative ranks – finding exceptional risk taking in for non-existent returns – the yen crosses would certainly be swept up in the move.

Looking for an ignition point for fear, we have seen the greatest threats to global financial stability (the US Fiscal Cliff, Greece’s lead on the EU debt crisis, the possible exit of global central bank stimulus) back down one-by-one. Yet, each of these outcomes was expected by the market and the underlying issues of thin ‘return’ versus tremendously under-appreciated ‘risk’ remain. In the end, it is the catalyst that investors haven’t had time to prepare for that often carries the market furthest.

The market bearing on whether USDJPY puts in for another 2 percent climb or dramatic reversal next week will no doubt rest with the more severe imbalances of risk trends, but it is important to also remember the underlying yen fundamentals to this picture as well. Yields on the 10-year JGB this past week hit their highest level since September 18 and the 30-year tagged a 13-month high. This isn’t a carry trade advantage (the carry differential with its counterparts is still growing). Rather, this shows a fading demand for the safe haven government debt that lasts only as Japanese investors are comfortable enough to hold risk. Stimulus is another, considerable factor in this multi-month move. New Finance Minister Aso has said the government will present its plan for further stimulus before the BoJ’s next meeting (January 22). And, speaking of the BoJ, Governor Shirakawa (resolutely pushing back against government involvement in monetary policy decision) will see his term end by the beginning of April.

Given the precarious nature of all the factors necessary to maintain the yen’s current pace of decline, it is highly likely that we see a natural correction. However, to be clear, I am still a long-term USDJPY bull. Whether we look to financial and fiscal crisis or a return to risk with carry, the Japanese yen is still heavily over-valued against its benchmark counterpart. – JK