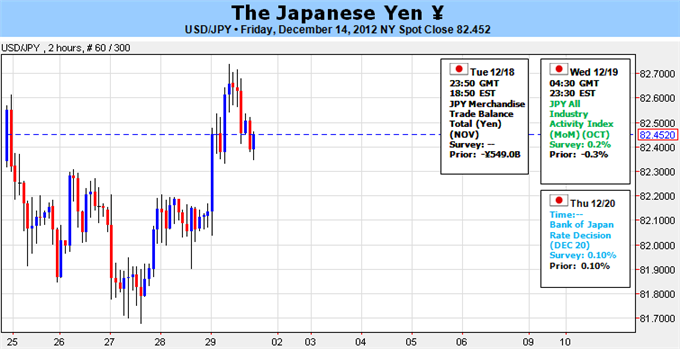 The Japanese Yen continued to weaken against its U.S. counterpart, with the USDJPY advancing to a nine-month high of 83.95, and the December 16 elections may continue to weigh on the low-yielding currency as Liberal Democratic Party President Shinzo Abe pushes for an unlimited asset purchase program. Indeed, threats of a political shift in the world’s third-largest economy has dampened the appeal of the Yen as Mr. Abe urges the Bank of Japan (BoJ) to expand its balance sheet further and pushes the central bank to adopt a 2%-3% target for inflation, but the outcome may fail to produce further weakness in the Yen should it yield a multiparty coalition government.

As the fundamental outlook for Japan deteriorates, the polls certainly suggest that Prime Minister Yoshihiko Noda will be unseated as he struggles to stem the risk for deflation, and we may see the Yen come under increased pressure as Mr. Abe pledges to strengthen the economy by weakening the local currency. However, with 12 different parties running for office, there’s speculation that the opposition leader will be unable to generate enough support to implement changes at the BoJ, and we may see the central bank refrain from embarking on an unlimited asset purchase program in an effort to retain its independence. Indeed, we may see Governor Masaaki Shirakawa continue to clash with Japanese policy makers as the central bank head sees an unlimited easing scheme worsening the national debt, and it seems as though the BoJ will maintain its tepid pace of monetary expansion as the board expects to see positive price growth in the year ahead. Although we anticipate the BoJ to carry its easing cycle into the following year, we may see the central bank continue to sit on the sidelines at the December 20 meeting, and the Yen may regain its footing in the year ahead should Mr. Abe struggle to form a majority to push through the new initiatives.

As the relative strength index on the USDJPY comes off of oversold territory, the dollar-yen may continue to track lower in the week ahead, but we would need to see the oscillator breakout of the upward trend from September to see a more meaningful move to the downside. However, should the elections disappoint, the event may provide the fundamental catalyst to spark a sharp selloff in the exchange rate, and will be closely watching the 61.8% Fibonacci retracement from the 2011 high to low around 81.70 for near-term support. – DS