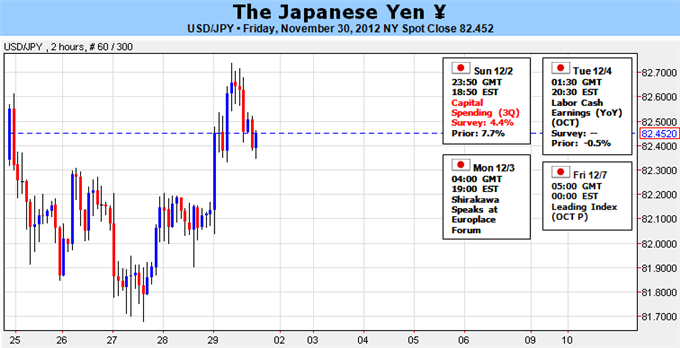 The Japanese Yen continued to trade near 7-month lows against the US Dollar (ticker: USDOLLAR), as speculation that Japanese elections would bring substantive changes to Bank of Japan policy continued to push investors away from the domestic currency.

The week ahead promises greater currency volatility as five major central bank interest rate decisions and US labor data threaten big moves in key pairs, but the biggest Japanese Yen moves may wait until the highly-anticipated Japanese elections due December 16. The issue at hand is simple: the Liberal Democratic Party (LDP) of Japan looks likely to take a majority of seats in the elections, and its leader Shinzo Abe has been quite outspoken in favor of aggressive monetary policy easing from the Bank of Japan. Abe said he would look for unlimited monetary policy easing and double the Bank of Japan’s 1 percent inflation target to bolster growth.

The former and likely future Prime Minister took a step back from his earlier rhetoric and said that he would not comment on specific policy actions from the BOJ once in office. Yet the fact remains that current BOJ Governor Shirakawa and both of his deputies will see their terms expire in the spring. With Shinzo Abe as Prime Minister their replacements would quite likely fall in line with aggressive policy recommendations. The threat to the Japanese Yen remains real, but questions remain on whether it will be enough to force the USDJPY to fresh highs through near-term trading.

The Japanese Yen remains extremely sensitive to global interest rates, and the fact that recent USDJPY strength has not coincided with similar strength in US interest rates warns against chasing gains. The chase for yields leaves particular focus on the week ahead when the Reserve Bank of Australia, Bank of Canada, Reserve Bank of New Zealand, Bank of England, and European Central Bank all announce interest rates in the span of three days. US interest rate outlook will likewise come into focus with market-moving US Nonfarm Payrolls data due on Friday morning.

It could prove a significant week for the Japanese Yen, and indeed we’ll watch any further developments ahead of the December 16 election. Yet for USDJPY bulls we may need to see a reaction in US Treasury Yields—perhaps on a surprise in US Nonfarm Payrolls data—to remain in favor of further US Dollar gains against the interest rate-sensitive JPY.

Recent US CFTC Commitment of Traders data showed that Non-commercial positioning recently hit its most net-short JPY (long USDJPY) since 2007 when the pair traded near 120. The Japanese Yen downtrend is clear, but the trade has quite clearly become crowded, and any short-term pullbacks could be significant. DR