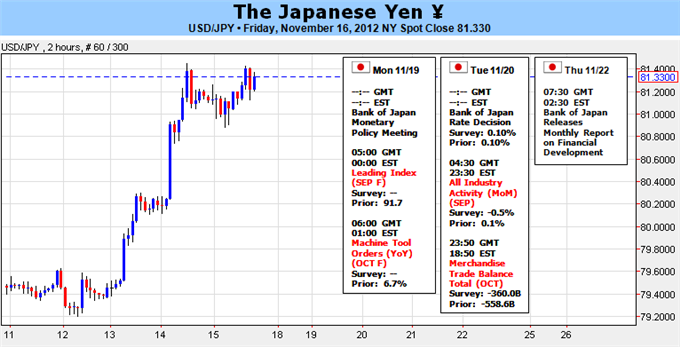 The Japanese Yen tumbled lower ahead of the Bank of Japan (BoJ) interest rate decision, with the USDJPY jumping to a fresh monthly high of 81.45, but the dollar-yen remains poised for a near-term correction as the low-yielding currency becomes increasingly oversold. After expanding its asset purchase program by JPY 11T in October, the BoJ is widely expected to maintain its current policy next week, but we should see the central bank continue to embark on its easing cycle as it struggles to achieve the 1% target for inflation.

Indeed, threats of a political shift in Japan dampens the outlook for the Yen as opposition leader Shinzo Abe, the main challenger against Prime Minister Yoshihiko Noda, calls on the BoJ to pursue ‘unlimited monetary easing’ and floats the idea of altering the central bank’s mandate to include specific fundamental targets. As the government continues to lean on the central bank and looks for increased cooperation, BoJ Governor Masaaki Shirakawa certainly faces an uphill battle in preserving the central bank’s independence, and we may see renewed bets for a currency intervention as Japan’s Cabinet Office lowers its fundamental assessment for the fourth consecutive month.

As lawmakers continue to warn of the ’adverse effects of deflation on the economy,’ we should the BoJ expand its balance sheet further over the coming months, but the central bank may have to take a more aggressive approach the region faces a heightening risk of slipping back into recession. However, as positive real interest rates in Japan makes the Yen appealing in the low-yielding environment, the headline-driven moves in the exchange rate may quickly fizzle out, and we may see the USD/JPY continue to give back the sharp rally as it appears to be overbought.

As the relative strength index on the USD/JPY approaches the 70 figure, the technical indicator certainly foreshadows a near-term correction in the exchange rate, and we may see the pair carve out a near-term top ahead of December as there appears to be a bearish divergence in the oscillator. Nevertheless, we should see interim support around the 50.0% Fibonacci retracement from the 2011 high to low (80.50), but we may see the pair fall all the way back to the 38.2% Fib (79.30-40) as the low-yielding environment is likely to persist in the following year. - DS