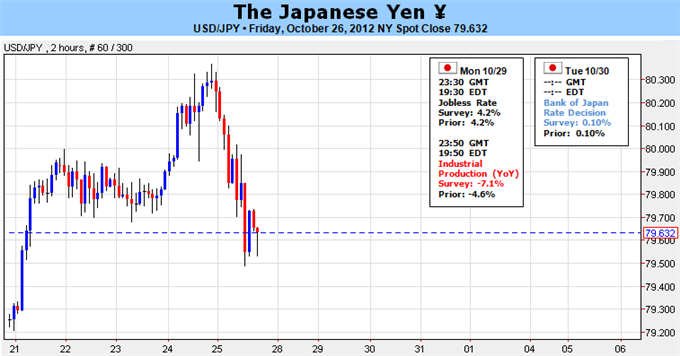 FOREX: Japanese Yen to Resume Down Trend on BOJ Stimulus, US Data

The Japanese Yen marked its largest five-day drop in nine weeks against the US Dollar at the close of trade on Friday. Much of the selloff reflected speculation about an expansion of stimulus efforts from the Bank of Japan at the October 30 policy meeting, with various sources including Morgan Stanley / Mitsubishi UFJ and Nikkei News tossing around a ¥10 trillion yen estimate for the size of the increase.

While Japanese authorities attempted to pour cold water on reports identifying a specific size of a stimulus, they didn’t specifically talk down the possibility of further accommodation in general. In the context of recent disappointments on the economic data front, this hints that an expansion of asset purchases may indeed be on the horizon.

On the fiscal side of the equation, the government unveiled a ¥750 billion spending package meant to prevent a sharp retrenchment in public-sector spending as officials struggle to reach a deal on financing legislation that would pave the way for continued bond issuance. The government spends about ¥2.3 trillion per quarter on average however, hinting the modest size of the fiscal boost will not stave off the impact of forced austerity on economic growth for very long. That seemingly gives the BOJ further encouragement to act.

Besides homegrown headwinds, the Yen continues to face downward pressure from the overall risk appetite landscape. The currency’s average value continues to show a significant inverse correlation with the S&P 500, meaning it is likely to broadly rise at times of risk aversion and fall when investor sentiment is on the upswing. That points the spotlight to the US economic calendar as another potential source of Yen volatility, with a busy docket of top-tier event risk including the ISM Manufacturing print and the all-important Employment report on tap.

US economic data has increasingly topped economists’ expectations over recent weeks, feeding hopes that firming growth in the world’s top economy will help offset a slowdown in Asia and a recession in Europe. Consensus forecasts call for broad-based improvement across most of the week’s headline data releases, suggesting the path of least resistance favors a pickup in risk appetite that amplifies existing domestically-derived Yen selling pressure.