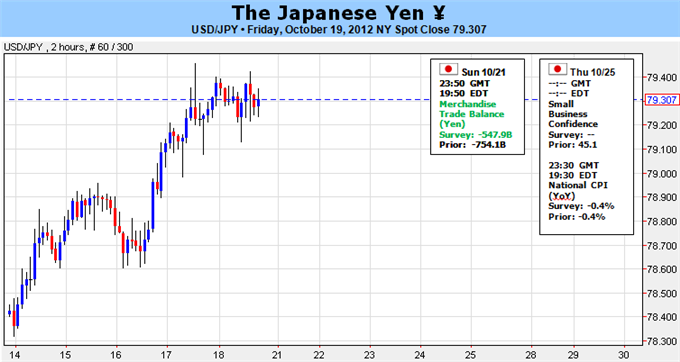 The Japanese Yen finally showed signs of activity, posting its single-largest weekly move since setting a bottom versus the US Dollar (ticker: USDOLLAR) in August. A significant turn in retail forex trader sentiment suggests a larger reversal may be underway, but a key US Federal Reserve interest rate decision could force significant volatility out of the yield-sensitive USDJPY pair.

The US Federal Open Market Committee decision will likely dominate attention through early-week trade, but a late-week US GDP growth reading could likewise bring important USDJPY moves. FOMC officials will almost certainly leave monetary policy unchanged as they stick to their open-ended asset purchasing program. It’s going to be important to watch for any shifts in rhetoric as traders attempt to predict whether the Fed will announce real conditions on what would force them to end Quantitative Easing policy.

For nearly a month we have argued that extremely one-sided US Dollar/Japanese Yen sentiment pointed to an important bottom, and the most recent turn in retail trader positioning lends weight to our forecasts. Yet we’re not quite out of the woods yet—price resistance at the key ¥80 mark looms large and would put the recent rally to an important test.

We have consistently argued that a larger USDJPY reversal would need to come on a material shift in market yields—specifically for the US Dollar. The US 2-year Treasury Note yield currently trades at the top of its 6-month trading range, and it will be critical to watch whether it is able to break higher.

Ultimately a jump in the 2-year would likely come on a shift in US Federal Reserve interest rate expectations. An important change in Fed policy looks unlikely in the foreseeable future, but we’ll keep a close eye on any and all shifts in Fed rhetoric at the upcoming FOMC decision. - DR