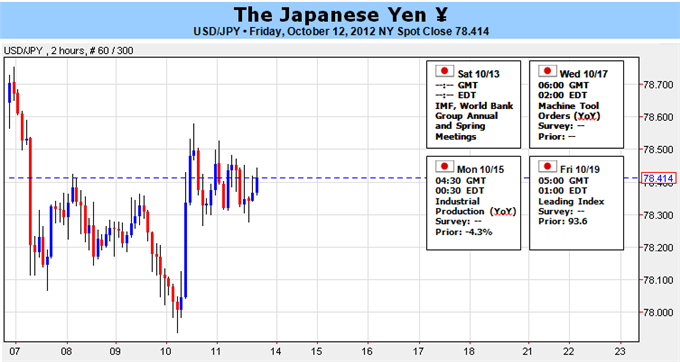 The Bank of Japan failed to talk down the local currency as the Yen advanced against most of its major counterparts, and the USDJPY may track lower in the week ahead as positive real interest rates in Japan continues to increase the appeal of the low-yield currency. Indeed, the BoJ Minutes continued to strike a highly dovish tone for monetary policy, with a growing number of central bank officials seeing a stronger case to more closely monitor the yen, while one member argued that the board may need to have a greater influence on the exchange rate as the persistent strength in the local currency drags on the real economy.

As the BoJ curbs its outlook for the world’s third largest economy and sees subdued growth over the near to medium-term, we should see the central bank continue to embark on its easing cycle, but Governor Masaaki Shirakawa may come under increased pressure to intervene in the currency market as Japanese policy makers continue to look for an export-led recovery. Indeed, Economy Minister Seiji Maehara talked up speculation for a ‘Yentervention’ as he sees the economy slowing further without additional monetary and fiscal support, while International Monetary Fund Deputy Managing Director Naoyuki Shinohara argued that the BoJ has ‘plenty of scope for monetary easing, including non-traditional measures’ as it struggles to achieve the 1% target for inflation. As the region remains at risk for deflation, Liberal Democratic Party (LDP) president Shinzo Abe claimed that the central bank should adopt a 2%-3% target for price growth, and we may see Japanese policy makers continue to verbally intervene in an effort to curb demands for the Yen. However, the BoJ may continue to rely on its asset purchase program to address the risks surrounding the region as its previous attempts to depreciate the low-yielding currency failed to have a lasting impact.

As Japan’s economic docket remains fairly light for the following week, we should see risk trends dictate price action for the USDJPY, but the series of lower highs paired with lower lows casts a bearish outlook for the pair as the downward trend from late June continues to take shape. As the relative strength index on the USDJPY continues to find interim resistance around the 58 figure, the pullback in the oscillator looks poised to produce a larger downturn in the exchange rate, and we may see the dollar-yen fall back towards 77.90, the 23.6% Fibonacci retracement from the 2011 high to low. - DS