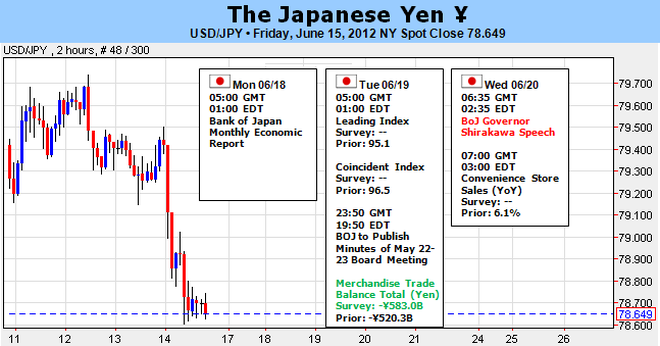 Yen Stands to Gain on Flight to Safety…or Does It?

The Japanese Yen had a decent week, finishing in the middle of the pack with the majority of its bullish move coming on Friday following the Bank of Japan’s inaction at their policy meeting. The Yen appreciated by 0.96 percent against the US Dollar as quantitative easing expectations soared, and it finished squarely unchanged against the Euro. The Yen was pummeled by the New Zealand Dollar, however, which had an exceptionally strong week – it’s strongest of the year – to which it depreciated by 1.33 percent against. And while the Yen’s strength amid the positive risk landscape is admirable, it is unlikely to last going forward.

Most notably, data aside, Yen traders need to be concerned with what policy officials will do in the days ahead. If one recalls the events surrounding the October Euro-zone summit, the Japanese Ministry of Finance intervened in the FX markets to weaken the Yen ahead of what was looking like turbulent markets in November. Thus, it is not uncommon to see policy officials step into the markets during times of high stress, just as we are in now.

To give credence to these claims that Yen traders need to be exceptionally cautious for a Yen intervention (or, ‘Yentervention’), comments on the wires this past Thursday suggested something is brewing, or at least, being discussed heavily. Finance Minister Jun Azumi alluded to the fact that Japan is prepared to act on the Yen exchange rate if needed, and even the International Monetary Fund gave its blessing for a Yentervention. The IMF took the unusual step of sanctioning currency intervention for Japan to counter stresses from Europe, noting its currency is “moderately over-valued”. These are strange times indeed, and while Japanese GDP in the first quarter was exceptionally strong, it’s clear that officials are concerned that the Yen’s resilience in the second quarter has dangerous consequences for the economy.

Moving away from the intervention talks by the IMF and the Japanese MoF, there’s not much by way of data due this week that could alter the Yen’s upwards trajectory – even though it has made these gains in what has been a bullish landscape for high beta currencies and risk-correlated assets. Of interest, the Merchandise Trade Balance Total for May, released on Tuesday, should show a further deficit which could be enough to spur intervention rumors. Alongside this, the Bank of Japan will release its May 22 to 23 Board Meeting minutes, which could give a better insight to the thought processes and intended policies of the BoJ.

On Wednesday, BoJ Governor Masaaki Shirakawa is set to speak as well, and it is likely that some additional volatility is seen around and after his speech. On the BoJ, it is important to consider that two new doves (policymakers who favor an accommodative policy stance) have been elected to the board, suggesting that more easing may be coming in the months ahead. Indeed, if the composition of the board is becoming more dovish, perhaps these talks of a Yentervention are very real; and should the BoJ take a more proactive stance, our end of year target for USDJPY at 90.00 may need to be revised higher.