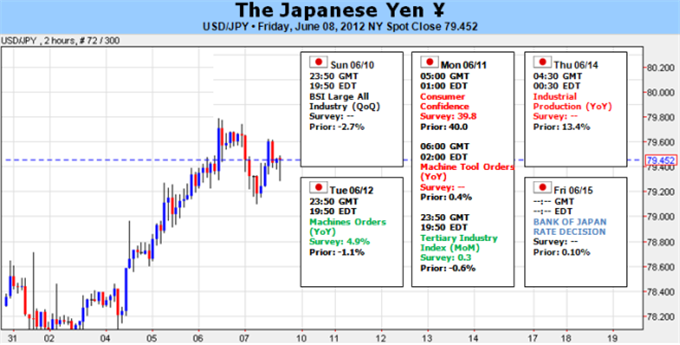 The Yen continues to track US Treasury bonds, with the correlation between a trade-weighted index of the currency’s average value versus its top counterparts and the benchmark 10-year note now at 0.75 (on 20-day percent-change studies). This puts risk sentiment trends firmly in control of price action, with the Yen aiming to follow bonds higher if risk aversion sparks a flight to safety across financial markets, and vice versa. Most critically, this turns the spotlight onto Eurozone debt crisis worries in the week ahead.

EU finance ministers are expected to hold a conference call on Saturday where Spain is rumored to ask for help recapitalizing its banking sector, where costs are estimated to be as high as €100 billion. This would mark escalation of the festering crisis considering Spain is the fourth-largest country within the currency bloc, making its rescue by far the most involved to be attempted thus far. A statement is expected to emerge following the call and will set the tone for markets at the start of the trading week.

Looking beyond Spain, sovereign risk jitters were already waiting to reemerge as markets inch toward Greece’s second attempt at a general election on June 17. The fate of Athens’ commitment to its obligations under the terms of the EU/IMF bailout – and thereby Greece’s membership in the Eurozone – appears to be in the balance. The possibilities appear grim. A win by the pro-bailout New Democracy party will bring an attempt to renegotiate aid terms, which seems bound to stoke uncertainty and fuel risk aversion. Alternatively, a victory by anti-bailout Syriza threatens to see Greece abrogate the arrangement altogether.

On the economic data front, the focus is on the US calendar as the key uncertainty in the global economic growth outlook remains the degree to which a choppy recovery in North America can offset headwinds from weakness in Europe and Asia. Expectations call for Retail Sales to drop for the first time in 11 months in May while the University of Michigan gauge of consumer confidence ticks lower and New York State manufacturing activity slows in June. Industrial Production is likewise forecast to decelerate. This stands to compound upward pressure on the Japanese unit as global output expectations darken while QE3 hopes linger, keeping Treasury prices well-supported and capping yields.

The possibility of intervention from Japanese authorities remains an ever-present wild card. If risk aversion metastasizes into outright panic and USDJPY volatility sees a dramatic pickup, policymakers may step in anew. Japan seemed to have far greater success with quiet management of the exchange rate through late 2011 than with previous big-splash intervention efforts, but one does not necessarily dismiss the other if a particularly sharp plunge takes the pair back toward the 76.00 figure. - IS