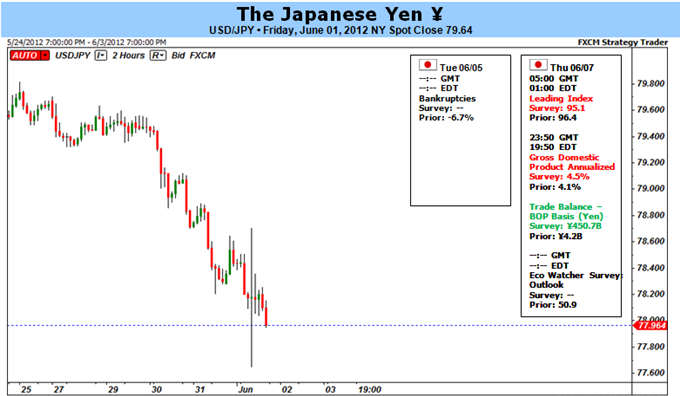 Japanese Yen Surges but is the BoJ Ready to Knock it Back?

The Japanese Yen had another strong week, posting gains of more than 2 percent across the major currencies covered by DailyFX. The Yen’s best performance came against the British Pound, with the GBPJPY depreciating by 3.98 percent this week. The Yen was also significantly stronger against the Euro, which it gained 2.73 percent against. The bulk of the Yen’s gains, especially against the US Dollar, came at the end of the week amid discouraging US growth and labor market figures. Ultimately, given what’s transpired this week, it is evident the Yen is the favored safe haven of choice right now.

Primarily, the Yen’s perceived value will be due to a diminishing appeal of the US Dollar. Multiple poor data prints – including but not limited to the ADP Employment Change report, the first quarter US GDP revision, and the May Nonfarm Payrolls report – over the past several weeks has raised the likelihood that the Federal Reserve will ease more. This will dilute the value of the US Dollar, and in the current environment, these speculations result in a shift of capital from one safe haven to another: the Yen is the primary beneficiary of this.

In the week ahead, there’s only one data print that matters: the Japanese first quarter growth reading due on Thursday (GMT, Friday local time in Japan). According to a Bloomberg News survey, Japanese growth is expected to have been stronger than initially reported, with the final reading showing growth of 4.5 percent versus 4.1 percent first reported. If this is indeed the case, the Japanese economy has been a bright spot and should weigh on further Bank of Japan efforts to devalue the Yen.

However, rounding back to today’s US NFPs, it is worth noting that some interesting price action developed shortly after the release. The underwhelming print prompted a US Dollar selloff and consequently a rally by the Yen; but after the USDJPY traded down into 77.66, the USDJPY shot back up to 78.72 – in just under ten minutes. This could be the BoJ intervening to stabilize the currency; we suspect that the BoJ and/or the Japanese Ministry of Finance to intervene in the markets in the coming weeks if downside pressure remains on the USDJPY. If this is the case, we expect this to happen sooner rather than later, given the escalation of the Euro-zone crisis and the impending weakness of the US Dollar. That is to say, if the BoJ/MoF wants to have a more meaningful impact on weakening the Yen, it is likely to occur before financial stresses reach panic levels – and we might only be a few weeks away from those conditions. Indeed, this overhang weighs on our otherwise bullish sentiment for the Japanese Yen, which alters our outlook to a more neutral tone for the coming week. – CV