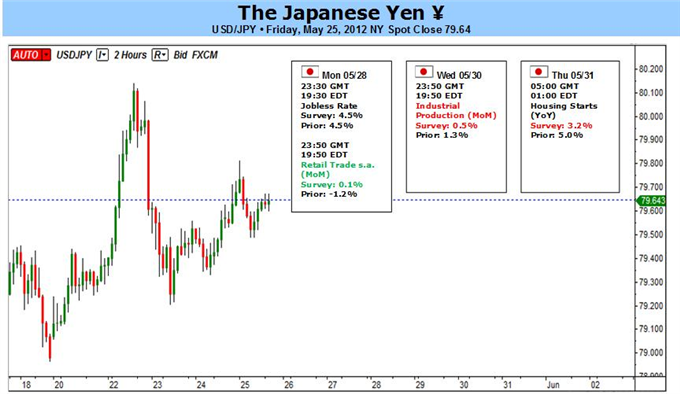 The Japanese Yen struggled to hold its ground against the U.S. dollar as the Bank of Japan maintained its pledge to pursue ‘powerful monetary easing,’ and the short-term pullback in the USDJPY may turn into a larger correction as it threatens the downward trend carried over from March. Although the BoJ preserved its current policy in May, Governor Masaaki Shirakawa held a highly dovish tone while speaking to parliament and vowed to tackle the risks surrounding the region as it aims to achieve the 1% target for inflation.

At the same time, we saw Mr. Shirakawa attribute the recent appreciation in the low-yielding currency to the shift in risk sentiment as the slowdown in world trade paired with the ongoing turmoil in Europe drags on investor confidence. As positive real interest rates in Japan heightens the appeal of the Yen, we may see the low-yielding currency continue to benefit from the flight to safety, but currency traders may turn increasingly bearish against the JPY as the fundamental outlook for the region deteriorates. Indeed, Fitch Ratings lowered the regions long-term credit rating to A+ from AA- as the Organization for Economic Cooperation and Development forecasts public sector debt reaching 223% of GDP next year, and the central bank may face increased pressure to intervene in the foreign exchange market as the ongoing strength in the local currency dampens the prospects for an export-led recovery. Japan’s Vice Finance Minister for International Affairs, Takehiko Nakao, who’s also viewed as the top currency official in the region, said that the government should be prepared to act against the Yen amid the excessive movements in the FX market, and we may see greater calls for a currency intervention as policy makers aim to encourage a sustainable recovery.

As the USDJPY appears to be carving out a short-term floor around the 79.00 figure, the dollar-yen looks poised to breakout of the downward trending channel, and we may see a reversal take shape next week as speculation for a ‘Yentervention’ resurface. However, as the pair struggles to put in a close above the 20-Day SMA (79.77), the pair may continue to track sideways in the days ahead, and we will be keeping a close eye on the relative strength index as it continues to find resistance around the 47 level. - DS