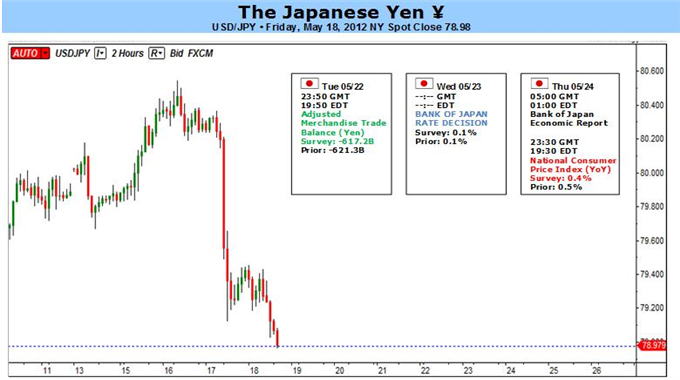 USDJPY Back Under 80.00 as EZ Concerns Grow; Where’s the BoJ?

The Japanese Yen was far and away the top performer this week, gaining nearly 4.8% against the worst performer, the New Zealand dollar. Overall, the Yen gained 1.1% against the US Dollar, which was the best performing currency. The theme here is evident: flight to safety was the prevailing trend this week. Yet as we turn towards the last full week in May, recent price action alongside seemingly diverting Bank of Japan and Federal Reserve monetary policies has placed the USDJPY in a precarious position: below 80.00. The USDJPY even retraced to its 61.8 Fibonacci on Thursday, or the “golden ratio” level, based on the February low to March high move. This warrants the question: will the BoJ look to weaken the Yen? Due to the tug-and-pull between the weaker USDJPY and a worsening Euro-zone crisis – one that demands liquidity and the Yen is one of two currencies that satiate this – we bear a neutral outlook for the Japanese Yen this week.

A think thank report on Thursday dispelled the notion that the BoJ would move in the market to stimulate more at its next policy meeting on May 23. This is largely due to the recent growth reading. The preliminary first quarter GDP reading for Japan cruised by the 3.5 percent expectation showing a 4.0 percent actual annualized print. Perhaps the better than expected reading was due to the weak Yen in the first quarter: the USDJPY appreciated by 7.75 percent (I would certainly think this helped and I’m sure BoJ policymakers do as well). If this is the case, that the BoJ is leaning away from easing more, then the Yen becomes the favored safe haven above the US Dollar given recent Fed rhetoric.

As the Fed minutes showed, there are now “several” up from a “couple” of policymakers that now believe more easing could be warranted if the US economy to falter in the periods ahead. While the USDJPY was relatively unchanged around this news, a severely disappointing Philadelphia Fed Manufacturing Index for May provided the impetus to fuel new QE rumors. But this has placed the USDJPY back below 80.00, a psychologically significant figure; what will the BoJ do? This could be largely predicated around data due this week, which unfortunately, comes out after the BoJ policy meeting on Wednesday.

The key piece of data this week, due on Thursday, is the National Consumer Price Index for April. According to Bloomberg News, the headline figure is forecasted to show that price pressures have moderated, falling to 0.4 percent year-over-year from 0.5 percent y/y in March. However, the core reading, which excludes the more volatile food and energy components, is expected to show that deflation remains, albeit at a slower pace, at -0.4 percent y/y in April from -0.5 percent y/y in March. Inflation, or rather, deflation, has been a significant problem for the Japanese economy for much of the past two decades, and certainly, further deflationary pressures are unwelcomed. The recent GDP reading would suggest that price pressures should be firmer, so it is quite possible that CPI figures tick slightly higher. A weak figure or even further downside price action in USDJPY could provoke another intervention by an increasingly desperate BoJ. All things equal, we expect the Yen to strengthen from a fundamental perspective amid the deepening Euro-zone crisis but we are weary of the heavy hand of a determined BoJ; and for that, our Japanese Yen forecast for the coming periods is neutral. –CV