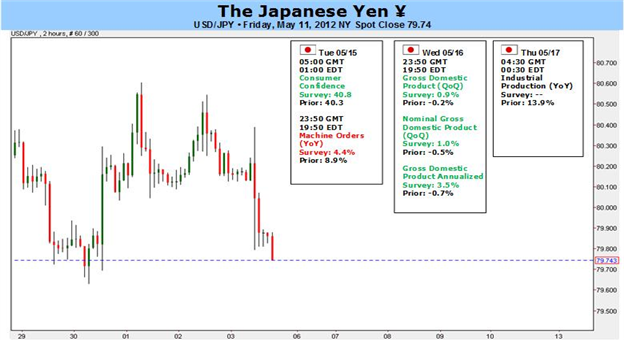 Japanese Yen to Strengthen amid Dash to Safety

The Japanese Yen had a very strong week, finishing second among the majors, only losing 0.10 percent to the top performer, the US Dollar. The Yen was strongest against the Asian-Oceanic currencies, the Australian and New Zealand Dollars, appreciating by 1.49 percent and 1.54 percent, respectively, as a continued stream of poor data from China alongside further stresses in the Euro-zone have provoked a dash for safety – highly liquid assets. The primary beneficiaries of these financial stresses have been the Japanese Yen and the US Dollar, and with no end in sight – objectively speaking, Europe’s problems are not going to be going anywhere the next week – we maintain a bullish bias for the Yen in the periods ahead.

With a studded economic docket this week, for the first time since early February, we can safely say that Japanese data this week could have a strong influence on the Yen. On Tuesday, Consumer Confidence and Machine Orders are due, but considering that one is expected to show an improvement (confidence up to 40.8 in April from 40.3 in March) and another to showed slow growth (orders up 4.4 percent y/y in March from 8.9 percent in February), there should be a net-neutral impact on the Yen. The main piece of data to keep an eye on is the GDP release on Wednesday.

After weak data throughout much of 2011 (predicated largely around the earthquake and ensuing nuclear disaster in March), 2012 growth figures look to start off on the right foot with an annualized growth rate of 3.5 percent in the first quarter. Nominal GDP is expected to increase by 1.0 percent after contracting by 0.5 percent in the fourth quarter of 2011. These figures are very important to the Bank of Japan. If growth undershoots these targets despite a substantially weaker Yen in the first quarter of 2011 – the Yen depreciated by 7.75 percent against the US dollar and by 10.93 percent against the Euro – the BoJ is likely to step into the markets and warn about devaluing the Yen further. In fact, back in February, after the disappointing round of fourth quarter GDP figures, the BoJ announced a $10 trillion ($128 billion) stimulus package. While this would weaken the Yen, we don’t expect the GDP print to disappoint so in our eyes, this shouldn’t be an impediment to the Yen in the near-term.

The main reason why the Japanese Yen is poised to strengthen have been developments out of Europe. As one of the world’s most liquid currencies, during times of less liquid markets, we tend to see a flight from the higher yielding currencies, such as the Australian and New Zealand Dollars, and back into the safe havens, the Japanese Yen and the US Dollar. With little relief in sight for European banks – the European Central Bank is against another longer-term refinancing operation, for now – investors are likely to hoard more liquid assets. In the current environment where “cash is king,” the Japanese Yen stands to be one of the top performing currencies going forward. –CV