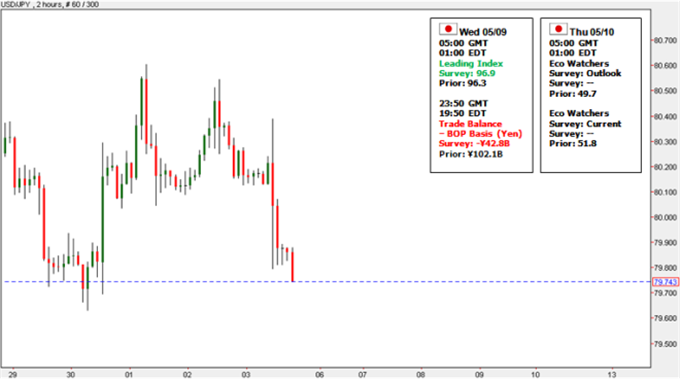 The Japanese Yen continued to appreciate against its U.S. counterparts, with the USDJPY slipping below the 80.00 figure for the first time since February, but the recent strength in the low-yielding currency is likely to be short-lived as we expect the Bank of Japan to carry its easing cycle into the second-half of the year. Indeed, the economic docket is expected to reinforce a dour outlook for the region as the trade balance is expected to contract JPY 42.8B in March, and the weakening prospects for an export-led recovery should encourage the BoJ to expand monetary policy further this year as it aims to meet the 1% target for inflation.

However, Moody’s Investor Services held a cautious outlook for the region and warned that the BOJ will not be able to meet its price growth target in 2013, and the central bank credibility may come under pressure as it struggles to balance the risks surrounding the region. Although the BoJ expanded its asset purchase program by another JPY 10T in April, government officials are certainly putting increased pressure on the central bank to take a more aggressive approach, and the Ministry of Finance may continue to push for a currency intervention as the ongoing strength in the local currency dampens the prospects for an export-led recovery. However, as the central bank continues to embark on quantitative easing, it seems as though the BoJ will refrain from jumping into the foreign exchange market, and we should see the board continue to expand monetary policy in 2012 in an effort to dampen the risk for deflation. In light of the recent comments from Moody’s, we may see the BoJ expand its balance sheet at a faster pace, and we may see the next installment exceed JPY 10T as the central bank pledges to ‘pursue powerful’ easing until it achieves the 1% target for inflation.

Indeed, the technical outlook points to further declines in the USDJPY as it maintains the downward trending channel from March, but the dollar-yen appears to be in a consolidation phase as the broader price action continues to show a bullish flag formation. In turn, we will be keeping a close eye on the relative strength index as it approaches oversold territory, and we will maintain our bearish call for the Japanese Yen as the BoJ continues to endorse its easing cycle. – DS