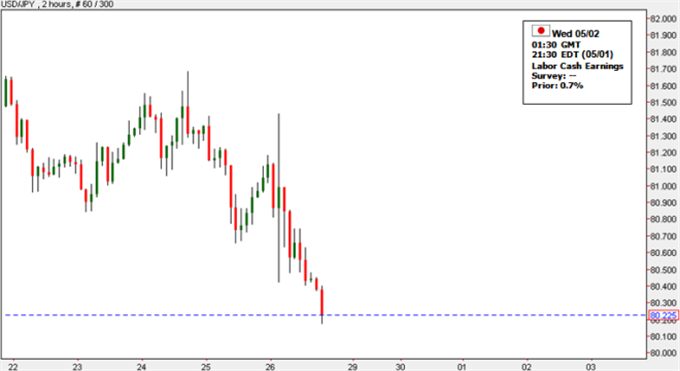 The Japanese Yen outperformed last week, rising against all of its major counterparts. Interestingly, the advance came even as the Bank of Japan expanded policy easing efforts. While cumulative monetary expansion amounted to just ¥5 trillion – a figure at the low end of market expectations – there seems to be more to the Yen’s move higher than just disappointment with the BOJ’s reserved posture. Indeed, a trade-weighted index tracking the Japanese currency’s value against an average of its leading counterparts shows a strong inverse correlation with the 10-year US Treasury bond yield, hinting a an important part of its advance owed to renewed hopes for another round of QE from the Federal Reserve following last week’s FOMC policy announcement.

The markets seized on comments from Fed Chairman Ben Bernanke saying policymakers were “prepared to do more” to help the economy if growth faltered, singling out additional quantitative easing (QE) as still “on the table”. Traders opted to take the statement in isolation, reading it as projectinga relative increase in the likelihood of another balance sheet expansion. This weighed on US yields, pushing the Yen higher as investors responded by increasing the weight of the US Dollar as funding currency in carry portfolios to the benefit of Yen, the other common low-yielder of choice for beta-seeking plays. This kneejerk reaction doesn’t seem to have staying power however as markets invariably digest the remainder of Bernanke’s commentary.

Keeping QE3 “on the table” makes sense. After all, it would be unreasonable to expect the Fed to do nothing if growth were to falter anew. Meanwhile, Bernanke made it clear that additional asset purchases were not favored, saying it would be “very reckless” to allow higher inflation for the sake of reducing unemployment. The central bank chief also added that the pledge to keep rates low through late 2014 was contingent on economic data and subject to revision if conditions were to warrant it (which presumably means rates can rise faster than the Fed currently expects). Coupled with upgraded growth, employment and inflation forecasts, this hardly seems to foreshadow additional stimulus in the pipeline, at least for now.

The week ahead offers a wealth of top-shelf US economic data including the ISM Manufacturing gauge and the all-important Nonfarm Payrolls print. Expectations are subdued across the board, leaving the door open for an upside surprise to force the markets into reflection mode. Indeed, as we argued last week, the recently lackluster performance from US economic data relative to consensus forecasts likely reflected a catch-up upgrade in economists’ view on the pace of recovery rather than a meaningful slowdown in performance. The pendulum is bound to swing in the other direction following recent disappointments, laying the foundation for a run of outperformance in US economic news-flow that tames QE3 hopes and allows yields to recover and countering Yen strength. – IS