Japanese Yen to Fall if BoJ Walks the Walk and Intervenes 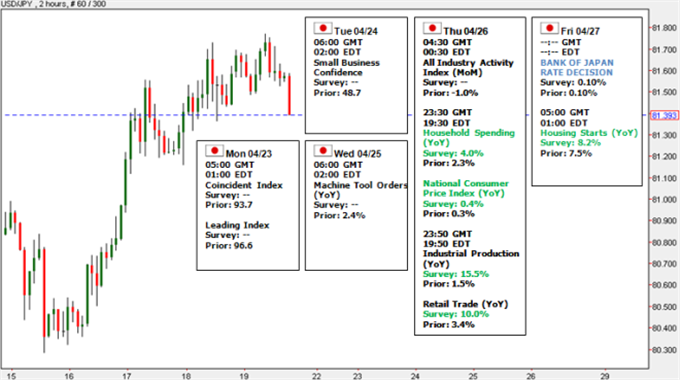 Ahead of the BoJ meeting from Thursday to Friday, there are a number of events that are likely to stoke volatility in the Yen-crosses, but the only one that could have broader implications is the consumer price index release on Friday. While the reading will come out the session the BoJ is expected to announce any new policy actions, we know the BoJ policymakers are very concerned with the country’s inflation outlook. On Wednesday, Governor Masaaki Shirakawa said that the BoJ is “committed” to monetary easing, and rumors have been floated that another ¥10 trillion stimulus package could be in the pipeline.

It is also possible that the BoJ raises their inflation target from 1.0 percent to 2.0 percent, which brings us full-circle to the consumer price index print that is due on Friday. Regardless if the BoJ’s inflation target is 1.0 percent or 2.0 percent doesn’t really matter considering that price pressures remain substantially subdued at this point and wouldn’t be breaching either level. According to a Bloomberg News survey, year-over-year price pressures are expected to have increased from 0.3 percent to 0.4 percent in March. Keeping this in mind, the BoJ appears poised to actively intervene in the market again.

Certainly, with respect to the BoJ, it is worth noting that markets may be already pricing in another round of easing, either via outright bond purchases or a signaled intention to keep rates held at all-time lows for the extended future, say our for another four to five years. Regardless of how the economy performs, the key indicator to watch for the Yen has to be inflation, as the BoJ, as indicated by Governor Shirakawa’s language, is “committed” to its interventionist policies. With the next of these measures due this week, we heed Governor Shirakawa’s warning and expect the Japanese Yen to depreciate in the days ahead of the meeting. – CV