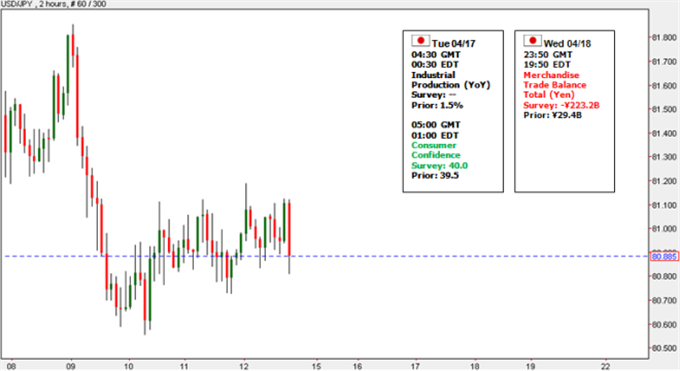 The Japanese Yen extended the advance from earlier this month as the Bank of Japan stuck to its current policy in April, but the low-yielding currency may struggle to hold its ground next week as the economic docket is expected to cast a weakened outlook for the world’s third-largest economy. As market participants see the adjusted trade deficit widening in March, the weakening outlook for growth could heighten expectations for additional monetary support, and we may see Japanese policy makers talk down the Japanese Yen in an effort to stem the risk for deflation.

Although the BoJ refrained from taking additional steps to shore up the ailing economy, central bank Governor Masaaki Shirakawa pledged to ‘pursue powerful easing’ just days after the rate decision, and said that the board will cooperate with the government to combat the risk for deflation. At the same time, the policy meeting minutes showed a push for increased purchases of Japanese Government Bonds (JGB) as the board works to complete its asset purchases on schedule, and the dovish tone held by the BoJ continues to cast a bearish outlook for the Yen (bullish USDJPY) as the central bank pledges to carry out its easing cycle throughout 2012. As Governor Shirakawa is scheduled to speak next week, the central bank head may make attempt to talk down the Yen further, and we will preserve our bullish call for the USDJPY amid the shift in the policy outlook. As the Federal Reserve looks to bring its easing cycle to an end, the divergence in central bank policy should continue to prop up the dollar-yen, and we expect the pair resume the upward trend from earlier this year as market participants see the FOMC raising the benchmark interest rate off the record-low over the next 12-months.

As the USDJPY continues to find interim support around the 50.0% Fibonacci retracement from the 2010 low to the 2011 high (80.50), the pair appears to be building a short-term base for a move higher, but we will keep a close eye on the relative strength index as it maintains the downward trend carried over from the previous month. In turn, we will wait for a bounce in the RSI to reinforce our bullish forecast for the dollar-yen, and we should see another run at 84.00 amid our projections for fresh yearly highs in the exchange rate. - DS