Japanese Yen Rebound Could be Limited with BOJ Set to Meet 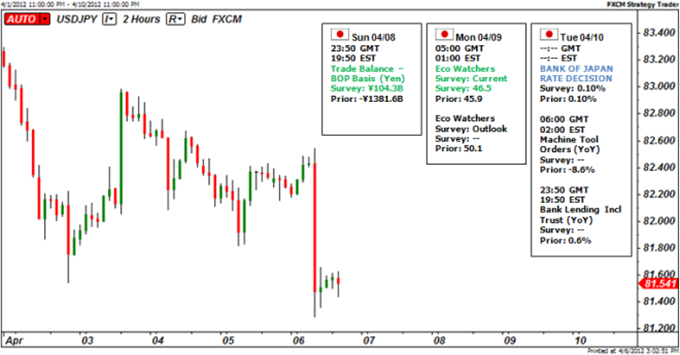 The Japanese Yen had a strong week, gaining 1.63 percent against the U.S. Dollar yielding it high marks as the top performer in the first week of April. The bulk of the Yen’s strength came on Friday, when the U.S. nonfarm payrolls report indicated slower job growth than expected, sending Treasury yields plummeting. While the data alone would support a stronger Yen come market open next week, there are a number of data and events on the calendar that temper our bullish Yen enthusiasm for the time being.

In terms of market moving data, three pieces stick out for having the most potential to influence the Yen for the remainder of the month. Ahead of market open on Monday, Japanese trade figures are due, and the weaker Yen appears to be paying dividends for the economy. According to a Bloomberg News survey, the Japanese trade balance is expected at ¥104.3 billion. While a surplus would be bullish for the Yen, it is likely that Japanese officials will look for a sustained surplus going forward before declaring that the Yen is no longer overvalued. A worse than expected print could prompt officials to discuss further steps to weaken the Yen going forward. Along similar lines, machine tool orders for February are expected to have jumped relative to the same period last year; expanding production could be aiding the expected trade surplus.

Taking a step back, on Wednesday, the Eco Watchers surveys for March should give some greater insight into the direction of the Japanese economy. Both the current situation and outlook gauges have improved recently, and another reading over 50.0 for the outlook survey would be the first time since April and May 2007 that there have been two consecutive readings above 50.0.

Also on Wednesday the Bank of Japan is set to meet. At their February meeting, the BoJ decided to inject ¥10 trillion ($128 billion) into the markets to help stimulate the economy and weaken the Yen. It has worked thus far; the USDJPY traded at an 11-month high in mid-March. There’s been chatter that the BoJ could move to weaken the Yen further at the coming meeting, and a weak trade balance figure could give scope to such a move. Unannounced interventions (like the October 31 operation) are likely behind the BoJ given the Yen’s weakness this year, but further steps are likely to be taken if the Japanese economy’s pace of growth does not accelerate in the coming weeks. With the BoJ looming overhead, our bias for the Yen this week is neutral/sideways; without the BoJ and in light of seasonal trends and data due, our forecast for the Yen would be bullish. – CV