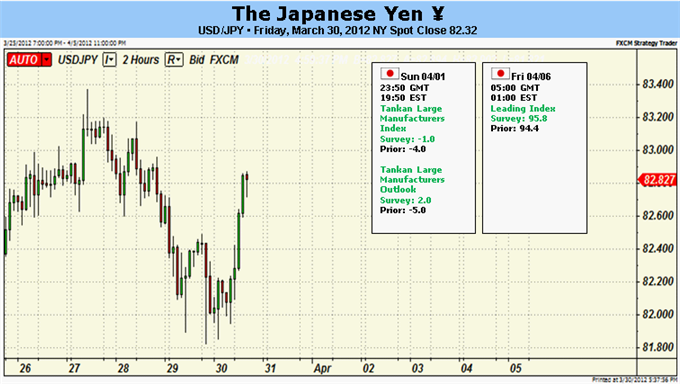 The Japanese Yen managed to regain its footing last week as global stock prices recorded their worst performance in over three months. The move played to the Yen's appeal as a safe-haven asset, sought for its abundant liquidity and store-of-value properties (courtesy of near-zero inflation). It also transmitted into price action via the Yen's inverse link to Treasury bond yields, which pulled back as risk aversion likewise sought refuge in US government debt. Looking ahead, the currency appears likely to find its way higher still as these forces will be put to work in the context of an economic calendar packed with heavy-weight releases.

Markets spent the first three months of the year putting to bed the near-term threat of a credit crunch courtesy of the Eurozone debt crisis. As we enter the second quarter, the outlook for global economic growth is reasserting its position as the dominant driver of financial markets, and the picture is far from rosy. By most estimates the single currency area – collectively the world’s largest economy – is already in recession. This is echoing in a marked slowdown in China, a regional powerhouse and the world’s third most significant growth engine, for whom the regional bloc is its largest export market. The sole bright spot is the US, where a cautious recovery appears to be gaining a bit of momentum, with the top question on investors’ mind being to what extent a healthier North America can offset malaise elsewhere.

With that in mind, the week begins on a dour note, with China expected to report that factory-sector activity slowed in March over the weekend. Final revisions Eurozone manufacturing and services PMI figures over the same period are expected to confirm both sectors contracted while the unemployment rate rose to 10.8 percent, the highest on record. Meanwhile, US data is likely to continue struggling to outperform relative to expectations. The ISM manufacturing gauge is expected higher but the risk of a downside surprise seems significant after broad-based disappointment on leading activity surveys released last week. The service-sector ISM component is expected to show moderation later in the week while minutes from the March FOMC sit-down are likely to mirror the relatively upbeat tone of the policy statement as well as surrounding commentary, sinking QE3 bets. Finally, the closely-watched Nonfarm Payrolls print is set to show the economy added just 205,000 jobs in March, the least in four months.

On balance, this points to continued Yen gains. The increasing inability of US economic data to generate positive data surprises overlaid with reinforcement of already acute fears about slumping output elsewhere stands to reapply downward pressure on risk appetite and encourage haven flows into the Japanese unit. While the FOMC minutes might have been a headwind previously, their implications for the slowly dissipating cap on Treasury yields have had ample time to be priced in already and the spotlight is likely to fall on the negative growth implications of fading stimulus prospects.