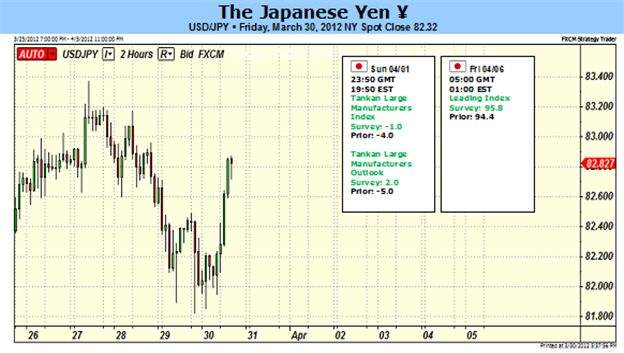 Looking to the week ahead, there are a few pieces of data expected to come across the wires that will help drive the Yen, and fortunately for the Bank of Japan, they should provide credence to another move to weaken the Yen via another massive liquidity infusion. While retail trade data on Wednesday is expected to show further deterioration – a sector that would be aided by a weaker Yen – the most important data comes on Thursday when inflation data is due. The national consumer price index is forecasted to show that price pressures held steady at 0.0 percent in February on a year-over-year basis, but my attention is on the core readings that central bankers pay more attention to.

The core inflation readings, which discount food and energy from the print, is expected to show a 0.9 percent contraction on a yearly-basis. This would mark the fifth consecutive month of price pressures contracting by 0.9 percent or more. Bank of Japan policymakers have been particularly vocal about the Yen’s exchange rate in recent weeks, most notably intervening in the market in mid-February vis-à-vis a ¥10 trillion ($128 billion) stimulus package. Although the Yen has depreciated substantially this year, officials would prefer to see a much weaker domestic currency to help exporters get back on track.

The end of March also offers a unique opportunity: Japan’s fiscal year ends. Seasonally speaking, the Japanese Yen tends to depreciate from mid-March to early-April as companies move funds around for tax exemption then repatriate said funds just a few weeks later (thereby lifting the Yen). This would suggest to look for a weaker Yen in the days ahead (a push higher by AUDJPY, NZDJPY, and USDJPY) before a deeper retracement by said pairs in three weeks. Given the fundamental data due, the compounding effect of seasonality leads us to a bearish Japanese Yen forecast for the period ahead. – CV