Japanese Yen at the Mercy of Fed Speaking Calendar, US Economic Data 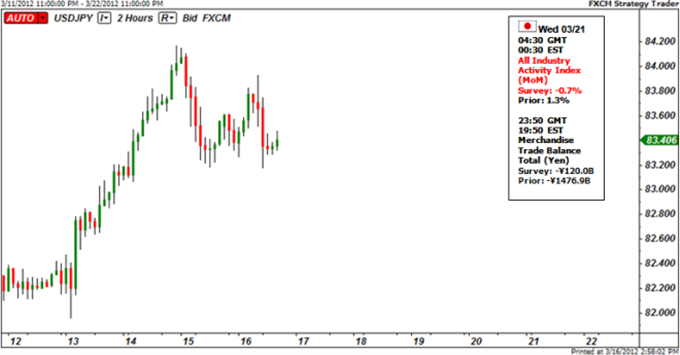 The Japanese Yen has been in near-freefall for the past nine weeks as the BOJ intensified efforts to unhinge deflation while the tone of US monetary policy took a conspicuous turn away from its theretofore ultra-dovish setting. In the week ahead, increasingly acute worries about the impact of rising oil prices on the already shaky global recovery add a level of complication into the equation, hinting the Yen may finally have scope to recover.

The Federal Reserve has begun to publicly acknowledge the material improvement in US economic data through the second half of 2011 and into this year. Fed officials’ public commentary turned noticeably rosier, punctuated by closely-watched Congressional testimony by Chairman Ben Bernanke, while the Beige Book regional economic conditions survey talked up progress and the FOMC policy statement carried a readily-apparent upgrade to the growth outlook (albeit while keeping the commitment to keep rates low through late 2014).

This dented QE3 expectations and left US Treasury yields to run higher, weighing on the Yen. As a benchmark for the baseline return on USD-denominated assets, Treasury yields reflect how relatively attractive it is for Japan to recycle its Dollar surplus (earned courtesy the trade imbalance) into US or convert it back to the local currency. Meanwhile, the BOJ topped up its array of QE-style efforts and opted for the unprecedented step of declaring a firm inflation target, signaling its absolute commitment to reflate the economy.

Concerns about rising oil prices disrupted the dynamic on Friday after US CPI printed showing the largest increase in 10 months in February. Although the gain of 0.4 percent was in line with expectations, traders latched onto the fact that close to 80 percent of the jump was accounted for by energy costs. Indeed, the core CPI reading fell shy of forecasts at just 0.1 percent. Against this backdrop, US consumer confidence unexpectedly fell while industrial production stalled, disappointing calls for a 0.4 percent increase.

With a recession in the Eurozone now widely expected to significantly slow global output as a whole, investors’ hopes have turned to the emerging pickup in the US to act as a counterweight. If fears that an oil price spike will snuffed out the US recovery again (as happened in late 2010 – early 2011) begin to multiply, souring sentiment will push capital out of risky assets like stocks and into safe havens including Treasury bonds. This will weigh on yields anew, allowing the Yen to correct higher.

A relatively quiet US economic calendar will mean that the realization of such a scenario hinges on a busy Fed speaking schedule. FOMC members Dudley, Tarullo, Yellen and Chairman Bernanke himself are all set to come across the wires, as are influential officials including Minneapolis Fed President Kocherlakota, St. Louis Fed President Bullard and Chicago Fed President Evans. Traders will keenly monitor the commentary for an update on how oil-price developments are factoring into the Fed’s policy calculus. On the data front, February’s batch of housing statistics headlines the docket. – IS