USDJPY Rally to Continue, But Yen Could Make Comeback Elsewhere 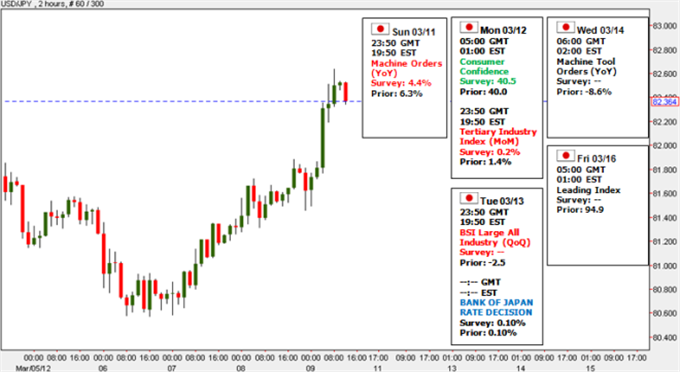 The Japanese Yen continued its deterioration against this week, falling by 0.69 percent against the U.S. Dollar, though its performance was in the middle of the pack relative to its peers. The carry trade unwound some the past five days, with the AUDJPY depreciating by 0.44 percent. Despite the Yen’s outperformance relative to the commodity currencies, the USDJPY is stronger by 6.76 percent this year, and the FX Carry Trade Index is up by 6.17 percent: more Yen weakness is likely in the coming months as the environment is “risk-on,” for now.

While the Japanese Yen is expected to continue its freefall against the U.S. Dollar – most notably supported by the widening differential in Japanese and U.S. bond rates – the Yen could rebound against its counterparts in the week ahead. In a risk-on environment, I would expect the Yen to continue its dramatic collapse across the board. On the contrary, in a risk-off environment in which lower yielding currencies are king, I would expect the USDJPY to either pullback slightly or stay relatively unchanged, and for the Yen to appreciate against the European and commodity currencies. The catalyst for the latter outcome may be on the near-term horizon.

With the Greek debt-swap deal expected to conclude by Monday, it now appears that the credit default swaps (CDS) on Greek debt will be triggered sometime in the next few days. The International Swaps and Derivative Association (ISDA) ruled today that a credit event has indeed occurred, meaning the CDS will be triggered. With the fundamental catalyst now in place, the Yen stands to gain against the European and commodity currencies in the days ahead should liquidity become a major concern.

In terms of Japanese economic events, there are a few events on the horizon that could jolt the Yen even further. While the machine orders and industrial production reports could provide a boost to the Yen, the key event is the Bank of Japan rate decision on March 13. At their last meeting, Japanese policymakers announced a ¥10 trillion ($128 billion) stimulus package to stem the Yen’s appreciation and boost trade. Policymakers are likely to continue to making comments deriding the Yen, blaming the currency’s strength over the past few years as a reason that the economy has suffered. Considering that the policies policymakers have utilized in the past to weaken the Yen have rarely worked, I believe that the BoJ will need to continue its proactive stance in intervening in the market to prop up the USDJPY if they want the Yen to continue its steady depreciation. This being the case, our end of year 2012 target of 90.000 remains. – CV