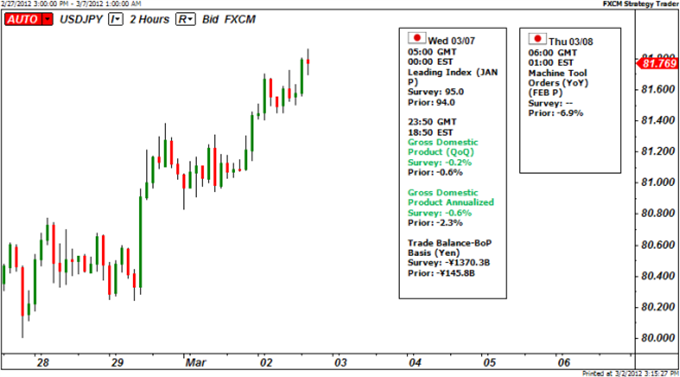 The Japanese Yen weakened further in March, with the USDJPY advancing to a fresh yearly high of 81.86, and the low-yielding currency may depreciate further in the following week as the fundamental outlook for the world’s second largest economy turns increasingly bleak. Although we’re expecting to see an upward revision to the 4Q GDP print, market participants see the trade deficit widening to a record high in January, and the weakening outlook for growth may drag on the exchange rate as investors anticipate the Bank of Japan to expand monetary policy further over the coming months.

Indeed, BoJ Governor Masaaki Shirakawa talked up speculation for additional monetary support as the central bank tries to achieve the 1% target for inflation, and the Yen remains poised to weaken further over the near-term as the board reverts back to its easing cycle. At the same time, Deputy Governor Hirohide Yamaguchi pledged to implement ‘powerful monetary easing’ to stem the risk for deflation, and the shift in central bank policy casts a bearish outlook for the Yen as the region lags behind its major counterparts. As the BoJ’s major counterparts move closer to normalizing monetary, the very dovish tone held by Governor Shirakawa should push the USDJPY higher in 2012, and it looks as though the central bank will continue to ramp up its asset purchase program over the coming months in an effort to encourage a stronger recovery. Moreover, according to the most recent Commitment of Traders report from the Commodity Futures Trading Commission, futures traders are scaling back bets for a rebound in the Yen, with net shorts standing at 1,203 versus the 17,257 net longs, and the USDJPY may continue to drive higher in the following week as pair breaks out of the multi-year downward trend.