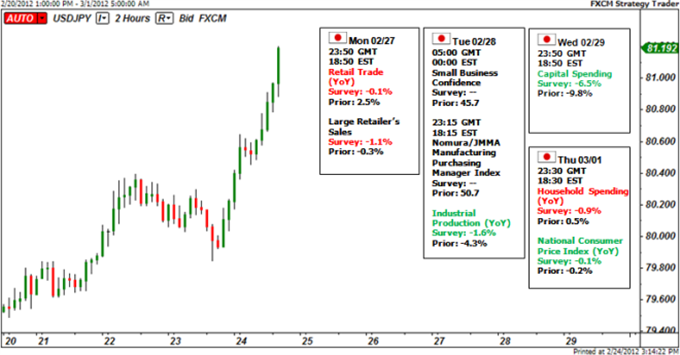 The Japanese yen continued its descent this week with the USD/JPY advancing more than 2.1% by the close of trade on Friday. The yen’s decline has been seen across all of its major counterparts with the low yielder off by 4.74% against the Swiss franc, 4.38% against the euro, 2.36% against the kiwi, and 2.29% against the British pound. While the moves in the yen have been quite profound, the currency is expected to remain under pressure with further advances in the pair likely in the coming weeks.

It is worth noting that the Yen’s dramatic depreciation has largely come after the Bank of Japan’s meeting on February 14, when Japanese policymakers announced a further ¥10 trillion ($128 billion) of stimulus to be injected into the market. The BOJ had good reason for this decision, with Japanese growth contracting by 2.3 percent in the fourth quarter of 2011. The BOJ’s decision to intervene in the markets came at an interesting time, as the USDJPY had not broken its all-time low set on October 31 (coincidentally, the day the BOJ intervened in USDJPY, sending the pair as high as 79.53). Market participants are seemingly under the impression that the BOJ will be more aggressive with their Yen-diluting measures.

Next week traders will be closely eyeing data out of Japan with industrial production and key inflation data on tap. Consensus estimates call for production to contract by 1.6% y/y, up from a previous contraction of 4.3% y/y with inflation expected to come in at -0.1% y/y from a previous read of -0.2% y/y. Although we are expecting to see the headline inflation print to contract by just 0.1% y/y, the recent trend in overall price growth, or lack thereof, could produce a larger than expected contraction, fueling ongoing deflationary concerns.

From a technical standpoint the USD/JPY still has plenty of topside potential with the pair breaking above the 100% Fibonacci extension taken from the October 30th and February 1st troughs at the 80-handle. Topside targets are eyed at the 138.2% extension at 81.50 backed by the 82-handle, and 82.40. Interim support holds at the 80-figure, with subsequent floors seen at 79.40, 78.80, and the 61.8% extension at 78.45. Our medium-term outlook on the USD/JPY remains weighted to the topside with dips in price action offering ideal entries for long positions. - MB