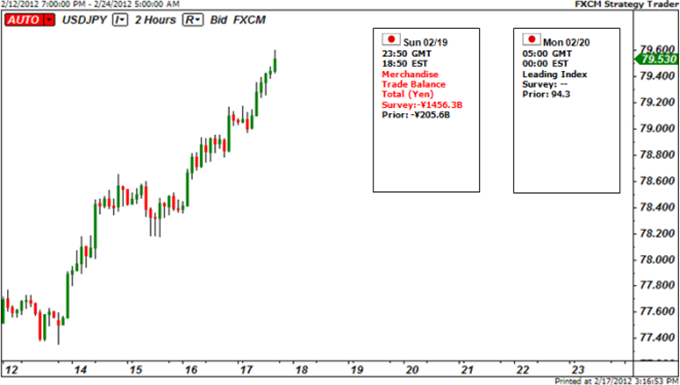 The Japanese Yen had a dismal week, falling 2.49 percent against the U.S. Dollar, bad enough to crown it the worst performing major over the past five days. As expected, the Japanese growth print for the fourth quarter set the tone for a poor performance, when the headline growth figures came in worse than expected. Consequently, with the country continuing to face both a deflationary and low growth environment, the Bank of Japan was forced to inject more Yen into the system. With ¥10 trillion ($128 billion) more Yen coming into the system, there’s little reason to look elsewhere for evidence of the Yen’s decline (although the firming of the commodity currency complex would have dictated a shift into higher yield anyhow).

Now that the USDJPY has climbed back to 77.44, intervention is becoming increasingly unlikely in a sense. By this I mean that the Bank of Japan or Ministry of Finance won’t step into the market on the pretence of a weak USDJPY; instead, further efforts by the Japanese financial governmental bodies will be predicated on the notion of deflation and growth explicitly. In last week’s weekly fundamental forecast for the Japanese Yen, I noted that “considering the policies used to fight [deflation and low growth] have not worked, any efforts going forward would have to be new and unique, beyond dumping significant amounts of liquidity into the system.” Japanese financial officials have yet to learn from their mistakes from the past twenty years, so the trend will continue, as will the injections of liquidity into the system.

Turning to scheduled event risk, there is little by way of market moving data due, now that both the Bank of Japan monetary policy meeting and the growth reading for the fourth quarter out of the way. Instead, broader risk trends will lead the way. Given what is going on in Europe in regards to Greece, next week will either produce a slightly bullish outcome – markets have already rallied substantially this year – or an exceptionally bearish outcome – markets by no means are pricing in the possibility of a liquidity draining event. In the case of the former, the Yen would continue along its steady depreciation across the board, including against the U.S. Dollar. In the case of the latter, the Yen would find substantial support, especially against the Euro and the Swiss Franc. Thus, while the short-term picture is unclear given the uncertain outcome of the weekend’s meetings in Greece, the long-term picture remains evident that the Yen will continue to depreciate. For now, we expect the USDJPY to settle the year trading at 90.000. – CV