Japanese Yen at Turning Point with Poor GDP Data Due 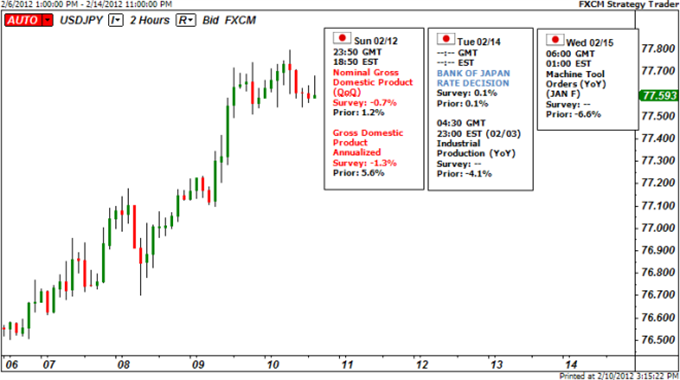 The Japanese Yen had a very interesting week. After rumors were afoot that the Bank of Japan and Ministry of Finance were preparing to intervene in the currency markets again, the USD/JPY suddenly rebounded off of the 76.00 handle. Although no intervention was official announced, it is possible that it was the result of some more ‘stealth’ intervention in the markets; this is purely conjecture though. What is certain is that Finance Minister Jun Azumi’s commentary over the week and the disappointing trade balance figures did not provide the fundamental catalyst the Yen would have needed to continue its late-January / early-February rally.

It is worth noting that just because the USD/JPY has climbed back to 77.61, intervention is not necessarily off the table. Finance Minister Azumi noted that Japan “won’t hesitate” to intervene “unilaterally” when “necessary,” and that he, like other Japanese officials, does not believe the Yen is a “stable” currency by any means. To this end, as Bank of Japan Governor Masaaki Shirakawa has also noted, all eyes remain fixated on the USD/JPY rate, and officials will pull the trigger at a moment’s notice to weaken the Yen. The last intervention came when the USD/JPY hit 75.63.

In terms of scheduled event risk this week, one piece of data pops out that is important to longer-term trends in Yen-based pairs. Typically, especially over the past few months, Japanese economic releases have had little if any influence on the Yen. However, considering how strong the Yen is, not just against the U.S. Dollar, more poor health readings of the Japanese economy may prompt Japanese officials to intervene in the currency markets preemptively, before the USD/JPY hits a fresh all-time low.

On Monday, Japanese growth data is due, and the figures are expected to be disappointing. Fourth quarter growth is forecasted to have contracted by 1.3 percent on an annual basis, while declining by 0.7 percent overall on a nominal basis. Both of these are worse than their prior readings of 5.6 percent and 1.2 percent, respectively. I expect Japanese financial officials to make comments deriding the Yen soon thereafter; they will threaten to substantially weaken their currency in order to pull the country out of what has now been a two-decade long deflationary spiral. Of course, considering the policies used to fight this trend have not worked, any efforts going forward would have to be new and unique, beyond dumping significant amounts of liquidity into the system. Should this be the case, which I believe it is, we could be establishing a major bottom in the USD/JPY, ultimately leading to a rally back towards 90.00 or higher by year end. – CV