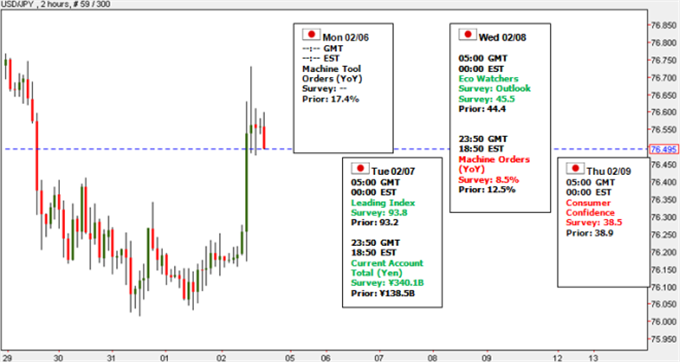 Just when Japanese Yen price action appeared to be regaining a sense of normalcy, the Eurozone debt crisis elbowed its way back into the picture. Leave it to Greece to muck up the works again. The Yen began to return to its long-term relationship with US Treasury yields this month as the Federal Reserve extended its projected period of “exceptionally low” interest rates by 18 months to the end of 2014 and ominously hinted it may launch a third round of quantitative easing (QE3), with USDJPY sinking dangerously close to the intervention-prone area around the 76.00 figure.

This made sense. The level of US yields has long served as a benchmark for returns on Dollar-denominated assets for Japanese investors who must perpetually decide what to do with a pile of USD left on their hands courtesy of the island nation’s trade surplus with America. When US yields rose, it made sense to recycle this surplus back into USD-based assets, driving USDJPY higher; when yields fell, the reverse was prudent, so it was quite reasonable to see USDJPY head south amid expectations that Ben Bernanke and company were preparing to ramp up asset purchases anew.

An unexpectedly robust US employment report seemingly cemented the relationship by showing it worked in reverse as well. Nonfarm payrolls crushed expectations, showing the US economy added 243,000 jobs in January compared with forecasts calling for a paltry 140,000 increase. While a long list of pundits commenced to squabble over the report’s validity after the release, the markets’ verdict was clear: the benchmark 10-year Treasury yield rose 116bps to mark the largest daily jump in over 6 weeks, hinting QE3 bets were being unwound and pulling USDJPY higher by a healthy 0.5 percent.

Holding out hope for more of the same appears ill-advised however amid reports that all three of the parties in Greece’s ruling coalition have rejected deeper austerity measures required to receive the next tranche of EU/IMF funding before €14.5 billion in maturing debt comes due on March 20. This makes the tense negotiations between Athens and its private creditors over a bond swap program meant to cut Greece’s debt burden and push out the due date on what remains further into the future effectively moot. Some reports suggest caretaker Prime Minister Lucas Papademos even resign over the dispute.

Needless to say, this lays the groundwork for a Greek default. In practice, that is not nearly as ominous of a prospect as it was even 2 months ago. The ECB has funneled close to half a trillion euro into the banks via its 3-year LTRO and has been dutifully buying other countries’ bonds, so the firewall against a massive credit crunch (especially given small the size of Greece’s economy) is arguably in place. That probably won’t prevent the markets from entering panic mode however, first as an initial knee-jerk reaction and later as traders extrapolate the Greek scenario to other, larger countries. The resulting bout of risk aversion is likely to spur safe-haven Yen buying once again, and with USDJPY still close to the 76.00 figure, bring intervention back into the picture to derail fundamentally-driven trend formation once again. - IS