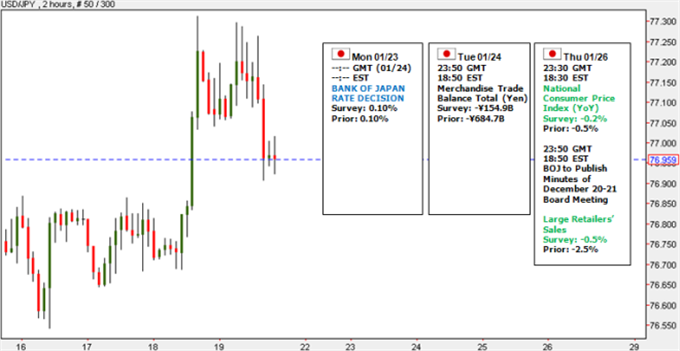 The Japanese yen is virtually unchanged against the greenback this week while the low yielder fell against all its major counterparts amid a weeklong rally in risk. As demand for “safety” diminished, a broad based shift into higher yielding assets weighed on the both the yen and the dollar as stronger than expected US data continues to suggest the economy is gaining momentum. Optimism about developments in Europe have also continued to support risk as successful bond auctions in the region’s most indebted countries eased concerns of a possible liquidity crisis with the euro advancing nearly 2% against the yen this week alone.

Next week’s Japanese economic docket is highlighted by the Bank of Japan interest rate decision, national CPI, and retail trade figures. Although the BoJ is widely expected to hold interest rates at 0.10%, the central bank may look to expand its asset purchases in an effort to support the weakened economy. Inflation expectations call for December National CPI to print at -0.2% y/y, up from a previous read of -0.5% y/y. As the fall in consumer prices begins to slow, deflationary concerns are likely to ease with the BoJ remaining focused on supporting the economy while attempting to shield Japan from the ongoing debt crisis brewing in Europe.

Looking ahead, the yen is likely to pare some of the losses seen this week against the euro and the aussie as investors scale back on risk ahead of major event risk with interest rate decisions on tap from the Federal Reserve and the Reserve Bank of New Zealand. This week the Fed release its newly implemented individual interest rate forecast from each of the voting board members in an effort to provide more transparency to markets. More importantly, talks of further quantitative easing from the central bank have continued to circulate this week with the possibility of further easing continuing to weigh on reserve currency. QE, which is a dollar diluting endeavor at best, remains the single greatest risk to the greenback, with no mention of further easing from the Fed likely to support advances in the USD/JPY pair. Keep in mind that any advances in the yen against the dollar are likely to remain tempered as intervention concerns continue to limit yen gains.

The USD/JPY failed a second attempt at a breach above the 38.2% Fibonacci extension taken from the November 18th and January 4th troughs at 77.25 in early North American trade. This level has continued to limit topside moves since it was last tested back on the 5th and 6th of January and remains paramount for further dollar advances. Interim support for the pair rests at 76.80 backed by 76.60 with a break below eyeing fresh post intervention lows at 76.40 and the 76-handle. Topside resistance holds at the 23.6% extension at the 77-figure, with subsequent ceilings eyed at the 38.2% extension at 77.25, the 50% extension at 77.45 and the key 61.8% Fib extension at 77.65. -MB