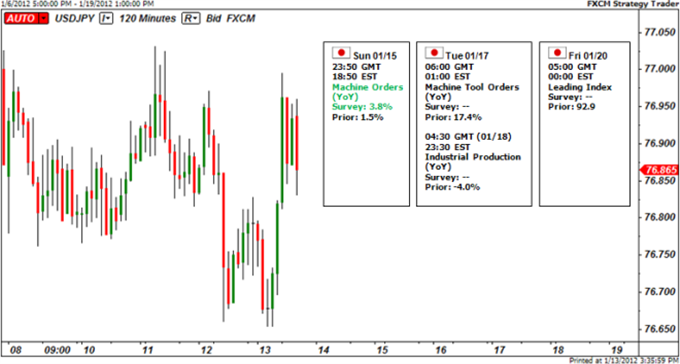 Recent months have seen the emergence of nuanced trading dynamics for the Japanese Yen, with the currency’s response to the major themes playing out across financial markets heavily dependent on the specific pairing in question. Crosses like AUDJPY, NZDJPY and CADJPY are playing their familiar carry-defined roles, taking their cues from stock performance. EURJPY and GBPJPY are increasingly underperforming as Eurozone debt crisis jitters dominate news-flow and capital flees European instability for liquidity havens, including the Japanese currency. Meanwhile, USDJPY and CHFJPY are at near-standstill, anchored by intervention threats from Japan on the former and Switzerland on the latter.

With this in mind, the week ahead presents a variety of possible outcomes. Eurozone sovereign risk fears were thrown back into the forefront Friday as Standard and Poor’s stripped France and Austria of their AAA credit ratings, added several Eurozone members to negative credit watch and issued further cuts to already tarnished member states. The week ahead presents ample opportunities to gauge the degree of pain to be borne by Eurozone governments at the hands of the bond markets in the announcement’s aftermath. France begins the week with a bill auction on Monday, promptly followed by Spain and the EFSF bailout fund on the following day. The downgrade of two of its AAA guarantors puts the creditworthiness of the rescue facility itself in question, threatening to undermine its already lacking potency. Portugal follows on Wednesday and both Paris and Madrid return to the markets Thursday to sell longer-dated paper. Needless to say, this flurry of activity opens the door for ample EURJPY and GBPJPY volatility.

To the extent that Eurozone jitters completely preoccupy stock exchanges, the commodity bloc crosses would be expected to follow suit. However, increasingly apparent decoupling over recent weeks suggests the acceleration in the US economic recovery is encroaching as an important catalyst amid hopes that stronger performance in North America will counterbalance slowing growth expected in Europe and Asia. Economic data has materially if unevenly improved, and the spotlight is now on the forth-quarter earnings reporting season to see what these numbers actually mean for the bottom line. A whopping forty-eight S&P 500 companies are due to report results, with announcements expected from many of the major financials. These ought to prove most interesting as investors seek to gauge the vulnerability of US firms to Euro-borne credit market stress. On the US data front, PPI and CPI figures are in focus but Home Sales numbers as well as the Philly Fed and Empire surveys may also prove market-moving. Elsewhere on the growth front, Chinese GDP figures are also on tap. - IS