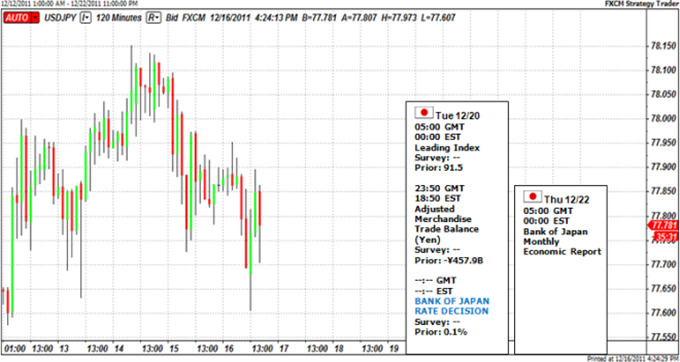 The Japanese Yen was the best performing major currency on the week against the U.S. Dollar, even though it depreciated by 0.21 percent against its safe haven comrade. The majority of the strength the Yen exhibited against the other majors came at the frontend of the week, when market participants were just starting to digest the results of the most recent Euro-zone summit that concluded last Friday. Funding concerns continue to drive markets these days, as liquidity conditions remains tight; coupled with seasonal end of year effects, recent U.S. Dollar strength might be a bit exacerbated but demands respect nonetheless.

Looking ahead, there are some key events on the docket to look for, despite the limited impact data and fundamental event risk has had on the Yen in recent months (the Yen ebbs and flows on funding needs and haven demand). The most important event of the week is the Bank of Japan rate decision, due out sometime near the close of Asian markets on Wednesday. The Yen’s recent strength remains a concern for the BOJ and Ministry of Finance – it is the best performing currency versus the U.S. Dollar this year – and there will likely be a statement made that officials are “watching the Yen closely.” Aside from that, markets are pricing in zero percent change of a rate move, and accordingly, only 2.0-basis points are priced into the Yen over the next 12-months.

In a broader view, the Yen will continue to move along with global risk-appetite trends; on good days for equity markets, the Yen will lose ground; on bad days for equity markets, the Yen will gain ground. Over the next few weeks, with liquidity conditions expected to thin out due to the holidays and end of quarter and end of year flows, a gradual depreciation is expected by the Yen, barring a major news announcement pertaining to the Euro-zone. However, with a ratings downgrade expected – Standard & Poor’s has threatened to strip core Euro-zone countries of their hallowed AAA ratings – there is potential for a sharp rally by the Yen against higher yielding currencies, such as the Australian and New Zealand Dollars.

Aside from this, it is worth a reminder that the U.S. Dollar remains the world’s reserve currency, and the recent uptick in American data suggests that the Federal Reserve may be easing away from introducing another round of quantitative easing. With these downside pressures on the U.S. Dollar slowly abating, coupled with our expectation that the Euro-zone crisis will get worse before it (hopefully) gets better, we expect the USD/JPY to strengthen with other crosses favoring Yen strength, in the periods ahead. –CV