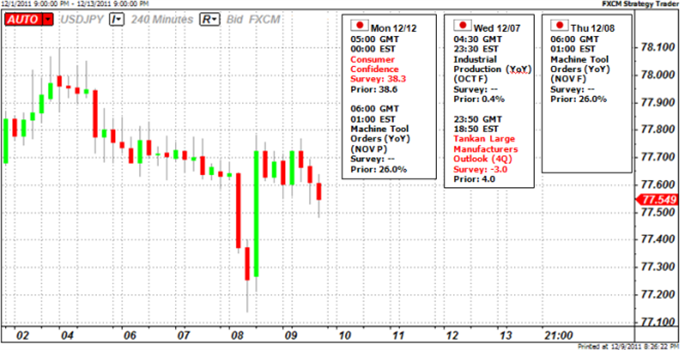 Japanese Yen price action has been defined by the tug of war between conflicting forces since late July, with USDJPY locked in a choppy range below the 80.00 figure as fundamental forces applied firm downward pressure while the fear of government intervention (underscored by two distinct episodes of such meddling) capped the downside roughly at the 76.00 level. The stale-mate may be nearing an end however as a shift in the currency’s underlying drivers aligns the markets’ outlook with the preference of Japanese policymakers, laying the foundation for a long-term reversal over the months ahead.

The Yen has been one of the best-performing currencies since the onset of the global financial crisis in 2008, proving to be an attractive safe haven as investors sought a venue with ample liquidity and strong store-of-value properties to ride out the turmoil. Liquidity was certainly not a problem for the world’s second-most traded currency, and neither was the store-of-value component given Japan’s endemically low (and frequently negative) inflation rate. Historically however, the Yen’s most significant fundamental driver has been found in US Treasury yields. Japan runs a considerable trade surplus with the US, which inherently produces a net inflow of US Dollars into the island nation. US Treasury yields – representing the benchmark return on US assets – has been the key factor in Japanese firms’ decision to either to recycle this surplus into USD-denominated investments or convert it back to Yen for allocation at home.

A reorientation away from sentiment-driven trade back toward the longer-term alignment with US yields appears close on the horizon, breaking the deadlock in USDJPY price action and beginning what is likely a long climb higher. The week ahead will brings December’s FOMC interest rate decision, where Ben Bernanke and company seemingly have no choice but to acknowledge the increasingly chipper pace of US recovery. Indeed, US economic data has been steadily improving since June and now appears to be building considerable momentum. Meanwhile, economists’ US GDP growth forecasts stand in stark contrast to that of the Eurozone and China, with only the North American behemoth expected to see output expansion accelerate next year among the three leading engines of global demand. On balance, this seems to leave little room to consider a return to QE, a worry lingering in the in the backs of investors’ minds since the program’s second round expired mid-year. A policy statement alluding to this increasingly apparent reality would go a long way toward allowing yields to begin creeping higher, reflect the hefty US budget deficit and American politicians’ apparent inability to do anything about it at least until after next year’s Presidential election, setting USDJPY on an upward trajectory along the way. - IS