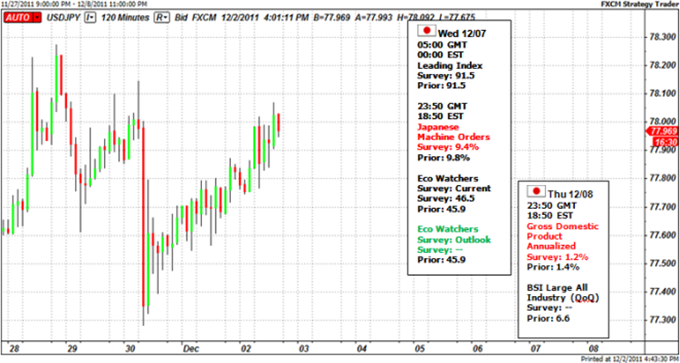 The outlook for the Japanese Yen continues to depend heavily on the currency pairing in question, with the crosses continuing to show a strong sensitivity to broad-based market sentiment trends while the benchmark USDJPY is distorted by intervention risk. In either case however, the principal consideration for the week ahead is the outcome of a summit of Eurozone leaders and investors’ resulting demand for the Yen as a safe haven.

The Yen fulfills both critical characteristics of an attractive safe-haven asset. It is the world’s third-most traded currency (according to data from the BIS), making abundantly liquid and thereby a compelling place to park capital at times of crisis because retrieving it is relatively easy once the storm passes and reallocation to higher-yielding investments is desired. It is also an excellent store of value courtesy of Japan’s anemic inflation rate. In fact, headline year-on-year CPI has been sinking deeper into negative territory over the past three months.

Whether these qualities will prove desirable over the coming days largely depends on news-flow out of the Eurozone. Clues emerging in the latest commentary from Nicolas Sarkozy and Mario Draghi – presidents of France and the ECB respectively – suggest policymakers are finally probing their way toward allowing the central bank to assume the role of lender of last resort for high-debt Eurozone member states, but that the cost of German acquiescence to such a policy requires establishing a framework for further fiscal integration. The EU leaders’ summit on tap for December 9th is set to be the venue where the process will be ironed out.

On balance, though the execution of such an arrangement is likely to prove very difficult, it represents the most policy direction so far in meaningfully dealing with mounting sovereign risk. Traders have seen their share of false starts however, and will closely scrutinize any lead-up and sideline commentary as well as the summit’s final outcome for operational details of any arrangement. The emergence of a clearly defined and immediately executable plan along the lines of the compromise described above is likely to boost confidence and weigh broadly on the Yen against the spectrum of its counterparts. Alternatively, another vague and convoluted scheme like the would-be “comprehensive” solution that emerged in October is likely to stoke the Japanese currency higher amid renewed risk aversion. In the case of USDJPY specifically, it may also signal oncoming intervention if prices are forced below the 76.00 figure once again. - IS