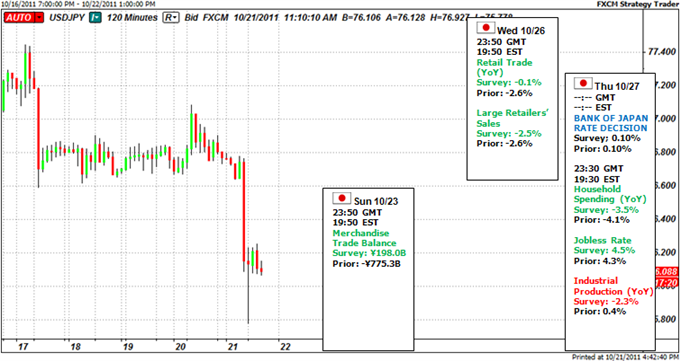 After weeks of seemingly moving nowhere against the U.S. Dollar, the Japanese Yen broke out on Friday, hitting a new post-war high against the world’s reserve currency, settling the week at 76.29, good for a 1.22 percent gain on the week. In spite of the positive developments out of Europe this week, the Yen easily outperformed its peers, a sign that despite the U.S. Dollar sell off and push higher by equity markets, market participants remain positioned defensively on the currency front.

The major development on Friday was a report out of the Wall Street Journal that suggested further easing may be on the table, this time in the form of more mortgage backed securities (MBS), similar to quantitative easing round 1. If true, the U.S. Dollar immediately becomes an unattractive safe haven, as the Federal Reserve’s quantitative easing policy has added up to little more than monetizing debt, devaluing the U.S. Dollar and boosting inflationary pressures.

In terms of scheduled fundamental risk on the docket, there are a handful of data releases in store for the coming week that could spark further volatility in USD/JPY and other Yen-crosses. The most important figure may be the trade balance data released at the start of trading in Asia on Monday, which is expected to show a surplus for the first time in two-months. The adjusted figure is also expected to move closer towards a surplus, though remain negative as it has since April. Should these figures continue to lag, we may see the central bank implement additional measures to balance the risks for the region as policy makers look for an export-led recovery.

The Bank of Japan is holding its monthly policy meeting, culminating with the rate decision on Thursday. It is widely expected that the Bank of Japan will leave its key interest rate on hold at 0.10 percent, given the long-term deflationary state of the Japanese economy. Likewise, raising the key interest rate would weigh on growth that has been marginal at best, attracting more investors to the Yen. In this regard, markets are not looking to the Bank of Japan rate decision for a surprise but rather for the commentary that ensues.

It’s important to recall that last week the Bank of Japan meeting minutes revealed that ‘further monetary easing might become necessary’ after maintaining its current policy in October.Today’s price action exhibited by the USD/JPY, on the heels of QE3 rumors, will draw finance officials’ collective attention back to the currency war being waged among the safe haven central banks (the Bank of Japan, the Federal Reserve and the Swiss National Bank). Going forward, barring an intervention, the USD/JPY looks to easily move lower on global growth concerns, but if the Bank of Japan looks to get involved, it could be some time before another break lower similar to what occurred on Friday is seen. –CV