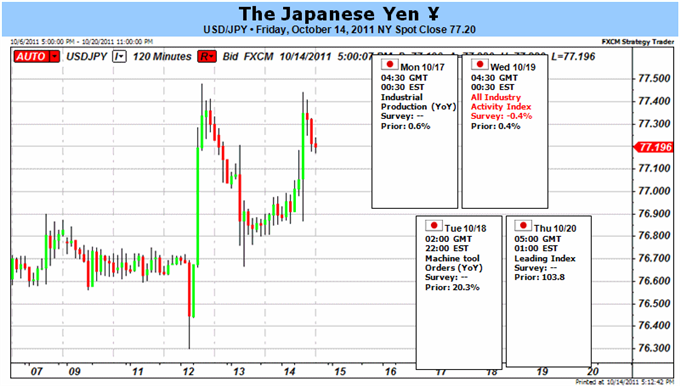 Japanese Yen Weakness To Accelerate, Breakout On The Horizon

The Japanese Yen struggled to hold its ground following the rise in risk sentiment, and the low-yielding currency may face additional headwind over the following week as the government steps up its effort to stem the marked appreciation in the exchange rate. Indeed, there’s rumors that the Japanese government will announce new measures to dampen the appeal of the local currency, and expectations for a Yen intervention may resurface over the weekend as market participants speculate Prime Minister Yoshihiko Noda’s coalition to act as early as next week.

At the same time, the Bank of Japan meeting minutes revealed that ‘further monetary easing might become necessary’ after maintaining its current policy in October, and we may see the central bank implement additional measures to balance the risks for the region as policy makers look for an export-led recovery. BoJ Governor Masaaki Shirakawa placed the burden on Europe, stating that the uncertainties surrounding the world economy is fueling the appreciation in the Yen, and went onto say that the slowdown in global growth is likely to last for some time while attending the Group of 20 meeting in Paris. As the central bank continues to shy away from directly participating in the currency market, the BoJ may resort to increasing its asset purchases, and current traders may raise bets for a sharp selloff in the Yen as policy makers increase their efforts to stabilize the exchange rate. According to the DailyFX Speculative Sentiment index, retail traders remain net long against the USD/JPY as the ratio currently stands at 5.09, and market participants may continue to bet against the Yen as it looks poised for a major breakout.

As the USD/JPY appears to be making another run at 78.00, we may see the exchange rate breakout of the narrow range from earlier this year, and the pair may threaten the downward trend carried over from all the way back in 2007 as looks to be carving out a major floor around 76.00. However, the dollar-yen may continue to trend sideways should the government stick to the sidelines, and there could be an opportunity to take advantage of the range-bound price action should the pair struggle to hold above the 50-Day moving average at 76.84. – DS