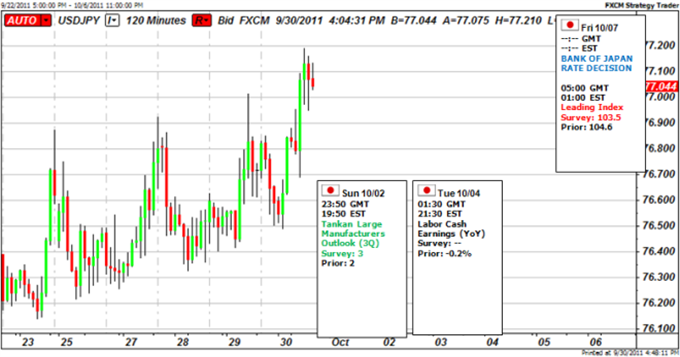 The Japanese Yen was one of the best performing currencies on the week, as expected given the continued global shift to risk-aversion. While the Yen did not stand up to its usual prowess against the other major currencies – it fell against the British Pound, Swiss Franc and U.S. Dollar – it remained significantly stronger than the commodity currency block. Following last week’s late drop in risk-appetite after the Federal Reserve decision to delay further quantitative easing measures, FX markets saw a mild pullback and consolidation at the start of the last week of the month and the quarter. As one of the strongest performing currencies the past few weeks and months, the Yen was due for a mild correction sooner rather than later, and this week could be that necessary reprieve given its 0.59 percent, 0.30 percent and 1.47 percent declines against the Dollar, Franc and Sterling, respectively.

As per what has become a usual trend with the Yen in recent months, while there is some data due over the course of the week, very little if any of it will have a lasting impact on the direction of the safe haven currency beyond a few minutes. However, with the Bank of Japan rate decision on the docket, putting this past week’s data in perspective, there is a heightened risk of further intervention to weaken the Yen.

Earlier, on Wednesday, retail trade data came in significantly worse than expected for August, dropping 2.6 percent from July on a monthly basis and 1.7 percent on a yearly basis, a clear indication that the stronger Yen has weighed on the Japanese export sector. Similar to how a struggling Swiss export sector pigeonholed the Swiss National Bank into employing drastic measures to weaken the Franc, the Yen is doing the Bank of Japan nor the Ministry of Finance any favors. Accordingly, while rates are expected to remain on hold when the decision is announced on Friday, any indication of further liquidity injections could stall the Yen’s advance.

No longer than a few weeks ago, former Japanese Finance Minister Yoshihiko Noda was installed as the new Prime Minister of Japan, following the dismissal of Naota Kan. It should be noted that the man chosen to replace Prime Minister Noda in his former role – Jun Azumi – carries little clout within Japanese governmental ranks. Accordingly, it is our firm expectation that Finance Minister Azumi will be serving primarily as a puppet for the prime minister, with sharp interventionist policy at work. With two interventions this year already under his belt, Prime Minister Noda could call for a third, in order to stall the Yen’s advance, providing an exceptionally brief boost to the Japanese export sector. But for this looming threat of intervention, the Yen would be likely testing the 70.000 exchange rate against the U.S. Dollar, in what would be considered a disaster scenario for the Japanese economy. – CV