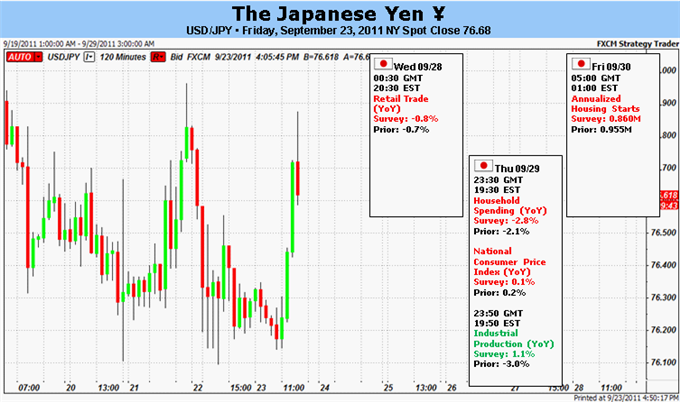 Risk aversion is heating up across financial markets as expected in the aftermath of last week’s Federal Reserve monetary policy announcement after Ben Bernanke and company opted not to expand their balance sheet in the face of slowing economic recovery. Looking ahead, this suggests the tug of war between traders and policymakers over the Yen exchange rate is set to intensify as the former pressures the Japanese unit higher with safety-seeking capital inflows while the latter seeks to keep it contained to secure export competitiveness. While it is unclear which side of the argument will prevail, abundant knee-jerk volatility seems to be one aspect of the outlook that can be forecast with confidence.

The benchmark USDJPY exchange rate – the target of Japanese official intervention when they step in to trim gains in the currency – has been locked in a tight range above the 76.00 figure since the authorities’ last foray into foreign exchange markets in early August. Tellingly, the first leg of the selloff in the S&P 500 – a proxy for the trend in risky assets at large – that began in July found a bottom and began to gradually correct higher over the same period. The retracement allowed for an uneasy balance to be struck between speculators and the Japanese government, securing several weeks of USDJPY stability. This balance is now threatened as shares begin to trend south anew, with S&P 500 positioning arguing for deepening risk aversion in the week ahead.

Japanese authorities appear intimately aware of the danger posed by eroding confidence across financial markets to their cheap-Yen policy. Surely it is no secret that traders seek out the currency at times of crisis both as a haven of liquidity and a store of value given Japan’s tendency toward borderline-negative inflation rates. As such, they no doubt stand ready to intervene again, and appear to have secured the tacit acquiescence of the international community. Indeed, while markets focused on the lack of concrete details vis-à-vis the EU debt crisis in the G20 communiqué released on Friday, they seemed to overlook a conspicuously familiar-sounding statement arguing that excess currency volatility hurts economic growth. The verbiage closely mirrorsrecent comments from Japanese authorities, hinting the island nation sought and received the green light to continue meddling in the exchange rate.

The ascent of Yoshihiko Noda, until recently the Finance Minister, to the premiership after the resignation of Naoto Kan seems to reinforce the likelihood of further official action. Jun Azumi – the man picked to replace Mr Noda – is largely a novice in matters of finance, meaning the Prime Minister likely continues to exert tremendous influence in shaping economic policy. Noda oversaw two major interventions since the beginning of this year, meaning there is little reason to suspect he will not push for similar policy going forward.