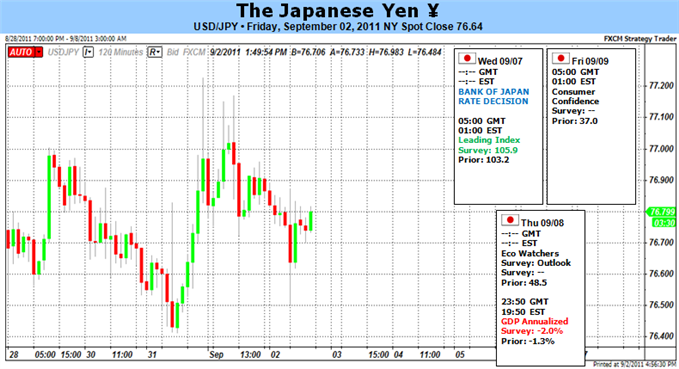 The Japanese yen is virtually unchanged on the week with a marginal advance of 0.13% against the greenback. The currency has largely remained well supported despite a pick-up in risk appetite earlier in the week that saw investors chasing yields to the benefit of the aussie and the kiwi. However a string of weaker than expected economic data from the US tipped the scales, with Friday’s dismal non-farm payroll report sparking a massive risk sell-off that saw all three major equity indices slide more than 2.2% on the session.

Last week Japanese Prime Minister Naoto Kan resigned after months of criticism over his leadership during the March 11th earthquake and subsequent tsunami that sparked the nation’s deepest postwar economic crisis. Taking his place is former Finance Minister Yoshihiko Noda who pledged to take new approaches to address Japan’s economic troubles. The newly elected official cited that the government “should principally respond by considering the basic guidelines and law for reconstruction.” The news sent the yen higher against the dollar on hopes that under Noda’s leadership the nation will be able to ensure a sustainable recovery. However the gains were short lived with the USD/JPY pair continuing to hold a 50pip range throughout most of the week.

Highlighting Japan’s economic docket next week are July trade balance figures, machine orders, 2Q GDP and the BoJ interest rate decision. Japan has the lowest key interest rate in the world at 0.10% with the rate holding below 0.5 since the late 90s, and is expected to leave them as such into the foreseeable future. Investors will be closely eying the BoJ after a two-day meeting on September 6th for clues as to future policy shifts as the persistent strength in the yen continues to threaten the isle-nation’s fragile recovery. With Noda at the helm, policy makers may see scope to increase asset purchases in an attempt to curb the yen’s recent rise and spur economic growth. Industrial production data released this week saw its lowest print since March, fueling concerns that the recent yen strength may be weighing on the export driven economy.

The yen has continued to range between the 76.50 mark and the 61.8% Fibonacci extension taken from the July 8th and August 4th crests at the 77-figure. A break below interim resistance at 76.70 sees subsequent floors at 76.50, the 76.4% Fib extension at 76.25, and the 76 figure. Yen gains may continue to be gradual however as traders remain reluctant to test the BoJ’s resolve by taking the yen too high too fast. Topside resistance holds at the 77-handle followed by 77.30 and the 50% extension at 77.60. -MB