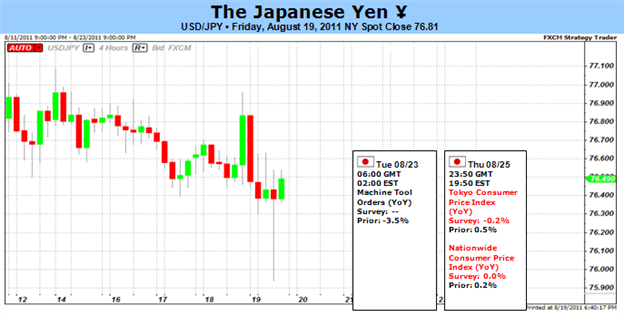 Japanese Yen to Continue Appreciation, Will Shrug Off Intervention

The Japanese Yen had a mediocre week, trading in the middle of the major currencies, rising against the Kiwi, Franc, Loonie and Greenback, while depreciating against the Pound, Euro and Aussie. Data was markedly better out of the Pacific Rim nation the prior week, which made the Yen’s lack of velocity against Pound, Euro and Aussie all that more interesting. Regardless, the key pair market participants, including Japanese governmental officials, continue to monitor is the USD/JPY, which gained a mere 0.21 percent this week, even as it touched a new post-war low of 75.95. The pair continues to be monitored by officials, with the threat of intervention continuing to loom.

In regards to Japanese data this past week, all of the major releases wee better-than-expected. On Sunday, the second quarter gross domestic product figures, long expected by economists to come showing severe contraction, registered at -1.3 percent versus -2.5 percent expected. The figures, in part, were expected so poor considering the natural disasters and ensuing nuclear crisis that plagued, and still plague, the island nation. However, it appears that the economy is rebuilding quicker than expected, despite the fact that the Yen continues to appreciate.

On a similar note, the merchandise trade balance figure on Wednesday also beat expectations, showing a balance of ¥72.5 billion versus ¥69.3 billion in July. The figure registered as a significant surprise as well; theoretically, a stronger Yen would make Japanese goods less appealing to foreigners, weighing on the balance. Regardless of the strong figure, companies in the Japanese export sector continue to plead with the government to intervene on behalf of the Yen, as to preemptively curb further gains by the Yen, which would more-than-likely erode profits for exporters.

The coming week has little by way of significant economic data, and in reality, it needs not much attention, given the Yen’s role as a safe haven currency, especially now that the globe is contracting at an increasingly rapid pace. All the same, the one key figure that is scheduled to be looked after is the National consumer price index reading for July, expected to show no growth in price pressures with a 0.0 percent reading. The Bank of Japan has tried for years to boost inflationary pressures by injecting trillions of Yen into the markets, in hopes that rising price pressures would ultimately trickle down into higher wages. This has not happened, and the resilient Yen has absolutely insulated the economy from inflationary threats. If the reading comes in lower-than-expected – that is, deflation in July – expect the time table to move forward for an intervention.

Looking ahead, an intervention is becoming an increasingly likely scenario. Both government and Bank of Japan officials have noted, time after time, that they are “monitoring the currency markets,” but this has amounted to nothing since the August 4 intervention. Now, however, as the Swiss National Bank has threatened to intervene itself, the Bank of Japan is on the offensive, in order to verbally warn the markets that further manipulation is a viable option. As such, with the pair trading to post-World War II lows, and volatility picking up once again, demand for safety will rise, driving up the Yen. –CV