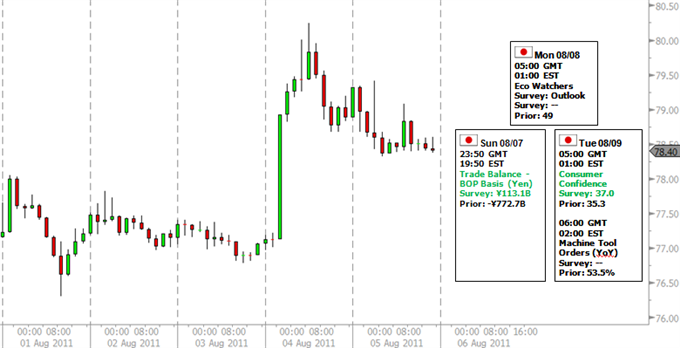 A cloud of uncertainty hangs over the financial markets after a tumultuous week of breakneck volatility was crowned by news that Standard and Poor’s has lowered the United States’ prized AAA sovereign credit rating. The agency cited the recent debt ceiling spat as a key part of its decision, saying “the political brinksmanship of recent months highlights what we see as America's governance and policymaking becoming less stable, less effective, and less predictable than what we previously believed.” As for the decision’s impact, the S&P speculated that although the reserve currency status of the US Dollar “confers…a funding advantage”, borrowing costs may still rise as “investors re-price relative risks”, adding between 50-75bps to the benchmark 10-year Treasury yield.

Forecasting the implications of S&P decision on the Japanese Yen is a dangerous proposition considering what ought to happen and how the markets will actually react come trading open could be wildly different. With that in mind, a number of scenarios emerge. The USDJPY exchange rate remains firmly correlated with Treasury yields, so all things being equal, an increase in US borrowing costs that is implied by the downgrade could be expected to send the pair higher. Betting on such an outcome seems ill-advised in the near term however, because if the decision produces a crisis of confidence in Dollar-based assets as a whole the greenback stands to find itself under pressure regardless of how much more attractive bond yields appear at the margin. Naturally, this kind of narrative runs squarely into the prospect of further intervention from Japanese authorities, which could step back into the markets to underpin USDJPY if a mass exodus from the greenback sends the Yen uncomfortably higher.

Finally – and perhaps most importantly – the focus on a deteriorating global economic growth outlook that produced a sharp bearish reversal in risk appetite and marked a major top in the S&P 500 benchmark stock index last week will likely color investors’ interpretations of the downgrade. Needless to say, rising borrowing costs as a result of the S&P’s action would hamper growth, with individuals and businesses finding it more difficult to spend and invest on credit, at a time when the recovery is turning increasingly fragile. Broadly speaking, that implies risk aversion and points the way higher for go-to safe haven plays like the Yen, Franc and US Dollar. However, with policymakers deliberately weakening the former two and the downgrade in and of itself tarnishing the latter, a clear alternative (with the exception of gold, which falls short on the liquidity front in terms of absorbing all safety-bound capital flows) is not readily apparent. The bottom line – it would seem – is just to wait and see what happens.