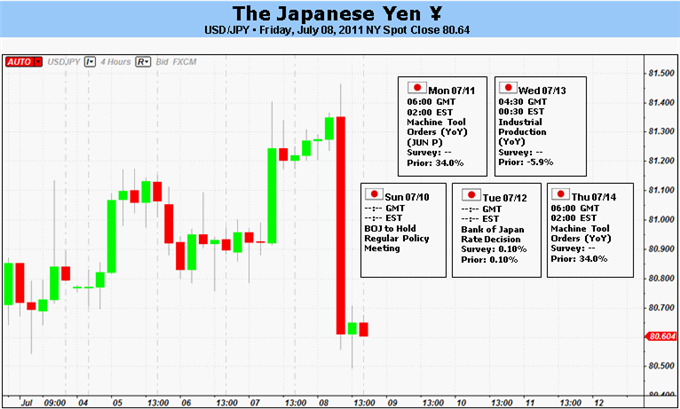 Relative interest rate spreads remain in focus for the Japanese Yen, a fact clearly on display as the currency reacted to the bitterly disappointing US Employment report: the yield advantage of 2-year US Treasury bonds over comparable Japanese debt tumbled 8 basis points – the most in over seven months – leading USDJPY to its biggest daily decline in six weeks. More of the same is on tap ahead, with weekly correlation studies continuing to show a very robust relationship between USDJPY and the US-Japan 2-year bond yield differential ahead of next week’s packed docket of economic data.

The release of minutes from the Federal Reserve’s June policy meeting is technically the most high-profile item on the calendar, but the document’s potency is likely to be diminished considering the markets have already heard its likely contents and priced it in following Ben Bernanke’s post-announcement press conference. Elsewhere, a hefty dollop of leading indicators is expected to yield broadly encouraging results: US Retail Sales and are expected to grow at an annual pace of 8 percent, the fastest in four months, the CPI report is forecast to put core inflation at the fastest since January 2010, and Industrial Production as well as the University of Michigan consumer confidence readings are set to rebound. On balance, these outcomes point toward upward pressure on US borrowing costs, hinting the Yen may reverse recent gains.

The lingering Euro Zone debt crisis is a wild card. While Greece gained approval for a 3.2 billion euro aid disbursement from the IMF, the larger issue now is contagion after Portugal was downgraded by Moody’s and the spread between German and Italian bonds opened up dramatically last week, feeding fears that the crisis has finally come to a country too large to be bailed out (Italy is the third-largest economy in the Euro Zone as well as the third-largest global bond market after the US and Japan). Needless to say, a mass exodus from risky assets driven by another turn for the worse in Europe would prove supportive for the Yen as traders unwind carry trades funded cheaply in the perennially low-yielding currency. The sharp jump in Chinese CPI reported over the weekend may further reinforce this dynamic, weighing against growth expectations on fears Beijing will redouble efforts to cool the world’s second-largest economy.