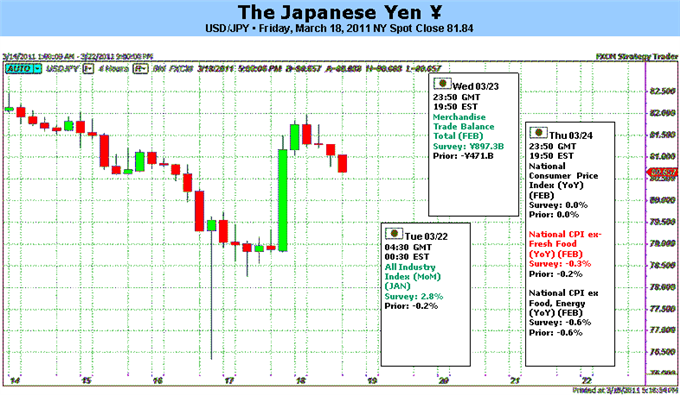 Japanese Yen to Rise as Intervention Targets Volatility, Not Direction

After a week of breakneck volatility that saw the Japanese Yen surge to a record high only to rapidly reverse course amid the first coordinated G7 FX market intervention in over the decade, the outlook going forward appears anything but clear. Looking ahead, policymakers with a clear challenge vis-à-vis the exchange rate: on one hand, a stronger Yen threatens the critical export sector that will be seen as instrumental in helping the economy recover; on the other, the Yen's increasing purchasing power will help to dull the cost of recovery efforts for individual as well as public and private entities considering so many goods and resources in Japan are imported. On balance, this means Japanese officials will look to manage Yen volatility rather than push prices in a given direction, suggesting renewed strength may be allowed to progress undeterred provided it progresses gradually.

With this in mind, the reasoning behind renewed Yen strength is compelling given the considerable headwinds still facing risk sentiment, hinting repatriation and an unwinding of carry trades will pressure the Japanese unit higher. First, while yielding a burst of knee-jerk optimism, the G7 action left core issues in the aftermath of the Tohoku earthquake largely unresolved. Indeed, casualties continue to mount, the extent of the damage and cost of reconstruction remains uncertain, and the threat of disaster at the Fukushima Daiichi nuclear power plant continues to linger.

Meanwhile, a new phase of the Libyan crisis began to unfold as the UN Security Council authorized the establishment of a no-fly zone and gave its member countries a virtually blank check to apply force to “protect citizens”, approving just about anything shy of outright occupation. As we have noted previously, markets see the situation in the North African country as a trial run for the worst case scenario in the aftermath of a protest flare-up, so the path chosen by the major powers from here (whether that is to materially intervene or not) will be weighed up as if it were happening to a far more significant crude supplier than Libya itself (i.e. Saudi Arabia). Increasingly intense unrest in Bahrain and Yemen further complicate the geopolitical landscape.

Finally, Friday will bring the much-anticipated summit of Euro Zone finance ministers that has been widely expected to produce a so-called “grand bargain” on dealing with the debt crisis on the currency bloc’s periphery. As we discussed in detail last week, the preliminary outlines of the scheme amounted to nominal progress but fell woefully short of a true bulwark against further sovereign stress, pointing to a wave of disappointed selling across the spectrum of risky assets (and to the benefit of funding currencies, including Yen) if the final version is not substantially strengthened.